December 8, 2019 in Editorial, Opinion by Editor

Michael Wakabi On December 11, a huge meeting of government technocrats, the chief executive of Uganda […] 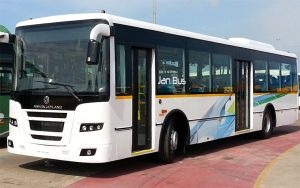 On December 11, a huge meeting of government technocrats, the chief executive of Uganda Development Corporation, political and administrative heads from Kampala and surrounding municipalities; and the promoters of Tondeka Metro, an ambitious urban transit venture, will take place at the Ministry of Works boardroom in Kampala. According to the author of the invite, Gen. Katumba Wamala, the junior minister for works and convenor, the purpose of the meeting is to “Harmonise the implementation of His Excellency the President’s Initiative on Urban Transport to supply and maintain 980 Ashok Leyland buses for Greater Kampala Metropolitan Area.”

The meeting comes as government apparently buys into a scheme promoted by Fred Ssenoga, a figure that has in the past, featured in a couple of unsuccessful urban transport initiatives in Kampala. This time round, Ssenoga is proposing a big push that will see 2000 large capacity commuter buses deployed in the greater Kampala Metropolitan Area.

Given the acute problem of urban congestion around Kampala, any proposal that seeks to decongest and promote smooth movement across the capital, is always bound to find a favourable reception. And so it is with Ssenoga’s project which has succeeded in securing the political support of no less a personality than President Museveni himself.

Unfortunately, that is where problem start for a project like this because the handlers tend to take the President’s word as the alpha and omega on any issue. As evidenced by Gen. Katumba Wamala’s letter, the approach to the Tondeka proposal is to go ahead and implement it without considering the alternatives. Ideally a project of that scale should have been opened up and subjected to competitive bidding. That would provide a market driven benchmark to the most economically efficient option. It would also limit the state’s exposure.

Ssenoga believes that he has a very viable business idea. Yet he wants the state to bankroll it via a USD200 million sovereign guarantee. Are there no investors out there that would assume this risk without exposing the tax payer?

Ssenoga’s own history suggests that the government would be assuming a huge risk if it provided this guarantee. He was one of the key players in Pioneer Easybus, a venture that demonstrated high level incompetence, greed and guile among the promoters. Standard Chartered Bank is still saddled with this non-performing asset.

To mitigate risk, a smarter approach would be to phase Ssenoga’s project with a pilot operating along one of the major axis into the city. That would possibly require modest sums of money that he and his partners should be able to raise through existing credit structures. It would also generate the operational experience, confidence and the numbers to support private sector credit for any further expansion.

The other downside is that Ssenoga’s proposal is premised on a monopoly. A monopoly in public transport has never served the public good anywhere and even smaller cities like Kigali have multiple operators serving particular zones along very tight KPI’s.

It is not in dispute that Uganda needs a solution to the runaway urban mobility crisis. But government needs to commission an independent study on Kampala’s transport needs and possible operating models before swallowing Ssenoga’s proposal line, hook and sinker.

If indeed the government were to provide such a guarantee, it would rather tie it to a requirement for the buses to be procured locally under BUBU. Kiira Motors Corporation KMC, has just validated its electric bus design and only needs additional capitalisation to launch serial production. KMC and Tondeka Metro are not mutually exclusive. Mating Tondeka Metro and any other urban transport projects to KMC, would give the nascent automotive systems integrator, a leg up since it has the capacity to supply the initial batch of buses for Tondeka’s pilot and subsequent phases. That way, the project would be addressing three national priorities – reduction in urban mobility’s emissions footprint; a homegrown automotive industry and a functional urban transport system – all from the same resource envelope. Buying from Kiira Motors would also reduce capital flight by a significant margin. The operator would also be assured of technical backup and after sales support from an entity that is locally accountable.