Michael Wakabi September 30,2018 – His peers were impressed that Manate Cyrus Vivish, the CEO of […] 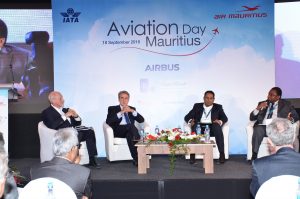 September 30,2018 – His peers were impressed that Manate Cyrus Vivish, the CEO of Air Tahiti had actually made it to the meeting in Mauritius. Starting somewhere between the United States and Australia in the western Pacific, his 15,000 kilometre journey was a befitting example of just how much aviation has opened up the world. Without the option of air transport, he would have probably given up on attending the meeting that was discussing the role of air transport in the economies of small developing island states.

Often physically isolated and heavily dependent on tourism, air services form an important, if costly bridge for these nations. According to Andrew Matters, the head of industry analysis at the International Air Transport Association IATA, travel and tourism form a critical part of the economies of small island states, contributing 1.8 million jobs and USD32.1 billion in GDP.

In the Maldives for instance, travel and tourism accounted for 76.6 percent of the gross domestic product and 37.4pc of employment in 2017. The corresponding figures for Seychelles are 65.3 and 66pc over the same period. Ninety-seven percent of arrivals to Mauritius are by air, making air connectivity critical to national development.

To support this vital function, many of these states have established national airlines. But with stiff competition, high fuel prices and uncertainty over the global economy, national airlines, everywhere have to make a compelling case for their continued existence.

“These challenges are not unique to airlines of small island developing states. But they are accentuated by remoteness, small local populations and the difficulty of achieving economies of scale with long thin routes, “says Alexandre de Juniac, the Director General of IATA.

The impact of scale and distance on competitiveness is best illustrated by Mauritius. Globally, the country was ranked 55th in the latest edition of the World Economic Forum’s travel and tourism competitiveness report. But it slips to rank 116 when rated on price competitiveness. It weighs in at 115 on the competitiveness of taxes on air tickets and airport charges and 89th on fuel price levels.

“Policies to improve competitiveness in these areas would boost aviation’s ability to deliver its economic benefits”, says de Juniac.

Dr. Arjoon Suddhoo the Chairman of Air Mauritius adds that besides adding value to states and donning the livery of national ambassadors, national carriers also have to reconcile their national mandate with shareholder demands for dividends.

Competition dilutes yields while the high cost of infrastructure eats into profitability. Governments also have to make hard choices since the cost of one aircraft could easily equal the national budget for health or education.

However Kapil Kaul, the Chief Executive for South Asia at the Centre for Asia Pacific Aviation CAPA, argues that national carriers are an integral part of small island states and to appreciate their value, it is necessary to look at their balance sheets alongside the country balance sheet.

“It is important to take a more holistic view of the positive impact of air connectivity, because the total economic contribution of aviation is rarely understood and fully accounted for,” he says adding; “the indirect, induced and catalytic impact of aviation can be significant and countries that recognise that opportunity can drive growth and employment.

Without competitive air transport, inbound tourism would suffer. In the case of a country like Mauritius, that would threaten a quarter of GDP. The major challenges such destinations have to contend with are a small home market, remote geographical locations and long distances from key source markets.

Yet the losses posted by a national carrier in such instances, can be bearable when looked at against the overall value add to the economy. Using the example of a national carrier that adds five narrow body aircraft with a seating capacity of 180, Kaul projects that the fleet could add 262,800 visitors to the destination annually when operating at a load factor of 80pc.  Based on a per capita spend of USD2000 including the airfare, the economy would earn USD526 million.

“Even if the airline was to make a loss of USD100 per passenger that would translate into a loss of USD26 million at the airline level. At the level of the national balance sheet however, you have earned USD526 million, which easily underwrites the airline’s loss,” Kaul argues.

Costs a key challenge for African airlines too

While intra-Africa connectivity has improved over the past decade, the continent has above average costs in key areas. Passengers and airlines pay 5pc above industry average for use of airport facilities and about three percent higher than average for fuel and aircraft overhaul and maintenance. Ticketing, sales and flight equipment rentals also cost African airlines about 2.8pc more than average.

The continent is however cheaper on station expenses which are 4pc lower than world averages, flight crew salaries (2.7pc), operations, passenger services and depreciation and armotisation.

Air transport accounts for 6.8 million jobs on the continent and delivers USD 72.5 billion of its GDP. While the future remains positive, and a few airlines remain profitable, at the industry level, Africa as a region remains in the negative. The global airline industry posted a profit of USD35 billion in 2017, Africa only managed to narrow its losses to about USD250 million.

IATA is advocating for policy stimulus and market liberalisation to spur African air transport. According to IATA, 135 million passengers travelled by air in Africa during 2017. That number will more than double to 321 million by 2037 if the policy environment remains unchanged. The numbers would be close to 350 million however, if policies improved and the market opened up further, while an increase in protectionism would limit growth to around 220 million passengers by 2037.

According to CAPA, there are many near term risks to global air transport. US sanctions on Iranian oil and falling production in Venezuela could see fuel prices pick up while rising interest rates could see finance costs rise. The possibility of a Chinese debt bubble and the unpredictability of the US administration are all risk factors that could disrupt airline strategy.

Kaul says that the reflex action of most airline managements during a downturn is to deviate from their business plans, halt aircraft deliveries – sometimes the very capacity they need to be able to survive the crisis better.

CAPA is proposing an Airline Stabilisation Fund, set up by governments and the World Bank, to help carriers ride out downturns and other disruptions to the business. Eligible airlines would drawdown during crises and replenish the fund when they return to profitability.

“Such a fund would help airlines to remain focused on their long term strategy because experience has shown that during cyclical downturns, capital constraints force airlines curtail growth,” says Kaul.

The fund may also be used to underwrite losses arising from fuel hedging. CAPA reasons that smoothening out the peaks and troughs, would over the long term, lead to a more stable industry.

Using the example of Air Mauritius which in 2009 posted a Euros82 million loss on fuel hedging, Kaul says if  you took this extreme event off the balance sheet through the proposed stabilisation fund, the carrier would have made a net profit of  Euros44.9 million over the ten years between  2008 and 2018.