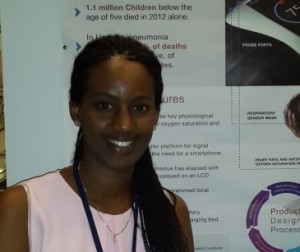 Phillipa has developed an intravenous appliance that is only a fraction of the cost of a new infusion pump.

June 16—Philippa Ngaju Makobore, a Ugandan electrical engineer, is in the running for the $100,000 top prize in the 2017 Innovation Prize for Africa (IPA). The winner is scheduled to be announced on July 18th in Accra, Ghana.

She has developed an Electronically Controlled Gravity Feed Infusion Set (ECGF). This is a medical device designed to accurately administer intravenous (IV) fluids and drugs by controlling the rate of fluid flow based on feedback from a drop sensor.

Research has shown that over 10% of children admitted to East African hospitals need immediate infusion therapy. The ECGF solves this problem as it is very easy to operate and has key safety features which include alarms for the rate of infusion (rapid or slow), total volume (over or under) and faulty sensors. A battery utilising a hybrid (AC mains and solar) charging bed powers the device. The ECGF has the potential to save lives by providing accuracy and safety at 8 percent the cost of a brand-new infusion pump.

The Zurich-based African Innovation Foundation (AIF) and the organizers of the competition say their basic aim is to increase the prosperity of Africans by catalyzing the innovation spirit in Africa. According to AIF, due to the exposure provided by IPA, past winners have gone on to secure over $30 million in investments to grow and scale their businesses. The IPA 2017 edition attracted a record 2 530 entries across 48 African countries.

A department head at the Uganda Industrial Research Institute, Philippa was also part of a team that last year won both international and local awards including a first place for the Innovation Award at the 2016 World Patient Safety, Science and Technology Summit.

AIF Chairman of the Board, Walter Fust said in mid-week, “By providing platforms to recognize innovation excellence in Africa and mobilising for African innovators, we continue to live up to our credo of engaging, inspiring and transforming. The inspiring stories of these nominees remind us that innovation and African-led solutions are indeed the answer to Africa’s growth and prosperity.”

Pauline Mujawamariya Koelbl, the IPA Director said, “Over the years, IPA has stimulated impactful and market-oriented innovations aiming at changing lives and transforming Africa. In this sixth edition to promote more investment in home-grown innovations as well as intra-African collaboration and trade to allow the scaling up of viable innovations across borders,”