Qatari delegation in talks with Museveni over investment

April 26, 2018—A Qatari delegation recently met with President Yoweri Museveni this week during which talks […]

April 26, 2018—A Qatari delegation recently met with President Yoweri Museveni this week during which talks centred on encouraging Islamic banking in Uganda and the possibilities of setting up several agro-industries, notably beef processing. 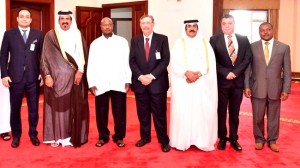 The delegation was led by Mousa Ali Abu Azab, the Qatar Vice Chairman and Chamber Coordinator and Ahmed Hussain Al-Khalaf, the Chairman of International Development Company.

Last year, Museveni visited the Gulf state which and has a population of 2.5 million people, but a GDP of $170 billion rooted in oil and gas exports. Qatar imports most of its foodstuffs from bigger states such as Saudi Arabia, but sources say the government wants to rapidly reduce this dependency in light of the political differences with its neighbours.

Museveni assured the Qatari visitors Uganda has a number of ranchers with the capacity to provide quality beef. “Here, we have cholesterol-free beef which entails good investment for export,” he said. Museveni himself is a leading cattle-keeper in western Uganda.

He assured them that he will link them with leading ranchers in the country to ensure that the project takes off. The Qataris also expressed interest in Uganda’s oil and gas sector.

Azab said that the Islamic Banking system is very stable and offers a sure guarantee in enterprises with services that are better for investors. He said the system has been successful elsewhere naming Europe as a case in point.

The Islamic banking system, also known as non-interest banking, is based on the principles of the economics of a lender and an investor sharing profit and loss and equity participation. In 2017, parliament passed an amendment to the financial institutions laws that made Islamic banking legal.

The President said using Uganda as their base, the Qatari can also exploit market opportunities from the 180 million people in the East African Community and also the bigger Common Market of Eastern and Southern Africa (COMESA) and the African continent in general.