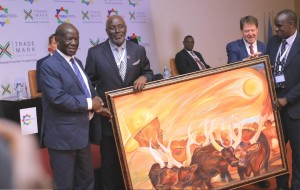 March 1—The East African Community(EAC) Partner States have been advised to look beyond the local markets if they hope to break into the middle income category in the near future.

“Do not produce goods that are not only fit for the Sudan market or African market. Thrive to produce for the world. Once you have a product that can be acceptable on the global market, the local market will come automatically”  Mukhisa Kituyi, the Secretary General of the United Nations Conference for Trade and Development (UNCTAD) said.

He was speaking in Kampala during the Trade Development Forum hosted by TradeMark East Africa (TMEA) in partnership with the government through the Ministry of Trade, Industry and Cooperatives. Most of the talks are being held behind closed doors.

Kituyi said if African countries can be able to trade competitively on the global market by producing and supplying goods that are on the international standard level, it would then be able to capture the local and regional markets.

He added that global trading has now moved online hence the need for EAC countries and the rest of the world to embrace technology if they want to compete. “If you are not on the electronic market, then you are not trading and you cannot compete with the developed country on the global market,” he said.

The TMEA CEO Frank Matsaert said TMEA has done a great job in the infrastructure and technology to ease trading by  removing trade bottlenecks like delays at the borders, registration and clearing of goods and documents plus making it easy for the common people especially the women and the youth to trade across borders.

However Matsaert said  the software side of the technology has to be improved to make it even easier and smarter for government officials to easily facilitate traders in doing their businesses.

“We need to reduce the burden of administration by providing the right software. We want to help more people, especially the common people so that they gain more,” Matsaert said.

“We want to thank TradeMark and other development partners for the trade facilitation. Government is committed to created an environment where all Ugandans can easily participate in trade so that we can all be able to achieve middle income status,” Sekandi said.