Home » U » 233 graduate from water utility facility in Kampala 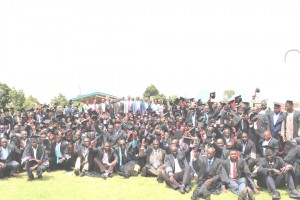 The NWSC says it has a commitment to develop skilled and highly motivated personnel to meet the challenges ahead.

The graduation ceremony at the Ggaba water works was presided over by the Minister of State for Higher Education Chrysostom Muyingo and the Minister of Water and Environment Sam Cheptoris.

The VSDF was established with support from GIZ and is accredited by the Directorate of Industrial Training under the Ministry of Education and Sports. PAS training makes transition from the informal to the formal education and training sector much easier. It enables vocational experience and skills acquired on the job to be validated and recognised.

Speaking at the function, Muyingo thanked NWSC Board Management for initiating a training programme that directly responds to both the institutional and labour market needs.

He said what NWSC was doing was in tandem with the Ugandan Vocational Qualifications Framework policy objective that allows for employers and industry experts to play a significant role in defining occupational standards and training content.

He pledged continued support of the Ministry of Education to ensure that the programme’s objectives are achieved. Cheptoris encouraged the graduates to adopt a positive mindset in everything that they do. He told the graduates, to “embark on a lifetime of learning, and you be well-prepared to meet the challenges that lie ahead. In your work, take a step back occasionally to appreciate the bigger picture. Read widely, talk to people beyond your field, and delve deeper into topics that drive our economy. This is what lifelong learning is all about.”

The NWSC Board Chairnan Eng. Dr. Christopher Ebal, said the graduation was in fulfilment of one of the thematic areas of the current NWSC five year strategic Direction 2016-2021 which emphasises the enhancement of staff productivity and capacity development through skills development, research and development, and Business re-engineering.

The Managing Director of NWSC Dr. Eng. Silver Mugisha said no organisation has greater than the quality of the staff who worked for it. He said the commitment of NWSC to develop skilled and motivated staff to handle the challenges of service delivery as the organisation gears for 100% service coverage.

“In National Water and Sewerage Corporation we believe the customer is the reason we exist. As we expand to provide services in more towns and serve more people, we are training and motivating our staff to deliver a high quality of service to our customers,” Dr. Mugisha said.

NWSC is in a phase of accelerated service delivery that has seen the organisation expand its service coverage from 24 towns in 2014 to 218 towns as at September 2017. Having expanded its service footprint from 24 to 218 towns in the last four years, NWSC and government of Uganda have rolled out a project to connect water to 12,000 villages by 2020 within NWSC operational areas.

The national goal of Uganda’s water supply and sanitation sector is to increase urban and rural access to water supply services from 77% and 65% respectively to 100% and 79% by 2020.