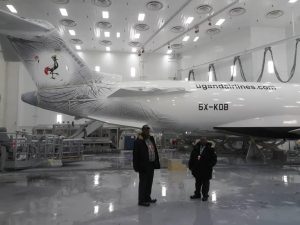 CAA Uganda airworthiness inspectors pose by the first example of a CRJ-900 due for handover in February. Courtesy photo

December 10, 2018 – Delivery of Uganda Airlines first CRJ-900 airframe has slipped to February 2019 after Ugandan authorities delayed to appoint a Designated Manufacturing Inspection Representative (DMIR) to oversee the assembly of the aircraft.

A DMIR is an individual consultant or organisation that is employed by the purchaser to make sure that the assembly of an aircraft conforms to standard manufacturing processes.

Images of Uganda’s first CRJ-900, registration 5X-KOB emerged last week showing the aircraft in the paint shop at the manufacturers facilities in Mirabel, ahead of engine mount and cabin installation. The images were later sources to a team of inspectors from the Uganda Civil Aviation Authority that were in Montreal to conduct airworthiness inspections ahead of putting the type on the Uganda register.

Uganda airlines had been scheduled to receive the first aircraft in January 2019 but delays in selecting a financier impacted the appointment of a DMIR. First delivery is now set for February 2019 and sources familiar with the Uganda Airlines project say the launch of commercial operations in April 2019 has not been impacted.

Sources further reveal that Kampala has so far deposited 35 percent of the purchase price for the CRJ’s and has tentatively reached agreement with AFRIEXIM Bank to finance the balance. Uganda is insisting on full purchase because it wants to have the certificates of ownership for the aircraft.

“Given the levels of mistrust around public procurement in Uganda and especially the speculation around this project, as well as the Kenya Airways debacle, we did not want to be in a situation where the public will have doubts about the ownership of these assets,” says a source involved in the procurement.

The source adds that while AFRIEXIM Bank had been selected as the financier, cabinet was lobbied by competing but lesser known funds that were offering a lower interest rate. A cabinet meeting subsequently tasked the Financial Intelligence Authority FIA, to conduct fresh due diligence on the Funds before the AFRIEXIM offer could be signed off.

That was in mid-November and 256BN is yet to get the latest status on this development.

The FIA’s executive director, Mr. Sydney Asubo, confirmed receiving the brief but said he was constrained to comment.

“Unfortunately I am not at liberty to answer those questions. My reports to the Ministry of Finance on this subject are confidential,” he said in response to our questions.

The parallel procurement for the long range Airbus A330-800 for which the carrier signed a purchase MoU last June is proceeding more smoothly. The manufacturer has offered export credit from agencies in the UK, Netherlands and France.

Uganda Airlines CRJ’s will be among the first to feature Bombardier’s ‘Atmosphere’ cabin while the A330-800’s will offer Airbus advanced Airspace cabin, the first aircraft cabin with a flat ceiling and near straight wall panels.