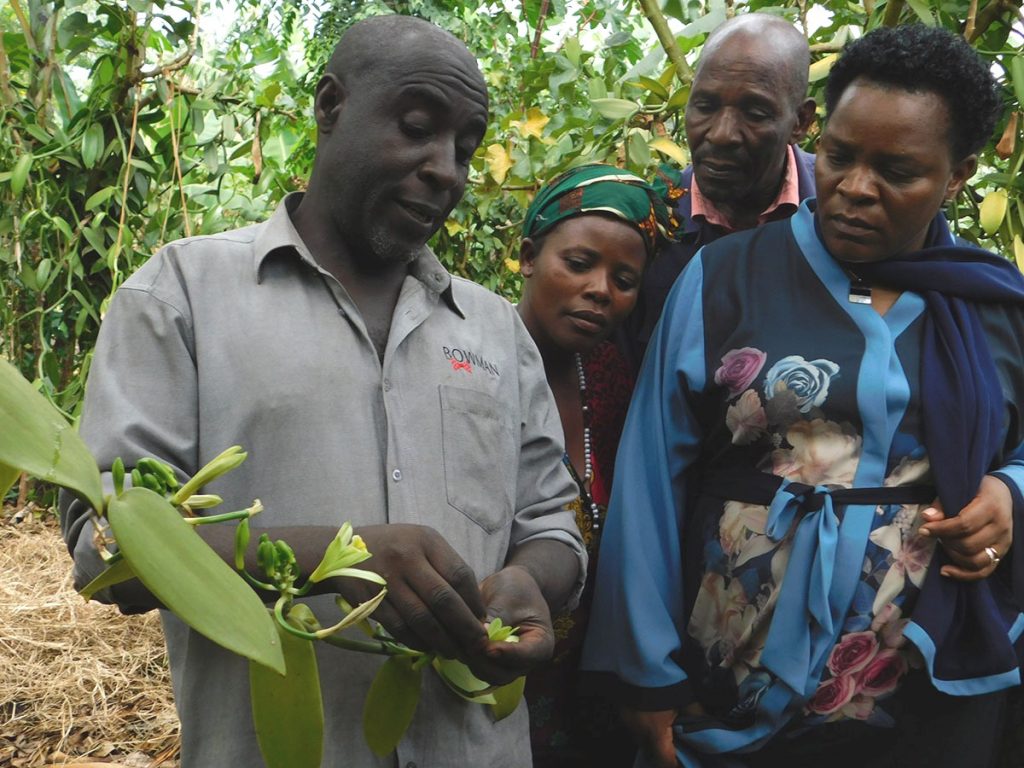 Farmers like Mugisha (left) are pleased by the current rising prices, but alarmed at the spate of thefts, especially during the night.

March 20—International prices for vanilla, one of the most difficult spices to grow, have shot up […]

March 20—International prices for vanilla, one of the most difficult spices to grow, have shot up resulting in a renewed interest in Uganda where climatic conditions are ideal for production.

Cultivation of vanilla is extremely labour-intensive. The plants themselves don’t even start producing vanilla beans until after three years. When they finally do bloom, the flowers only stay open for one day and have to be carefully pollinated within 12 hours of blooming.

Daniel Mugisha told 256BN, “The thieves connive with unscrupulous residents who scout out for ready crops. To salvage more than UGX60 million from an acre of vanilla, I have opted to install snares that our ancestors used to catch wild game.”

Some 80 pc of all global production is supplied by Madagascar. This contributes to the exclusivity of the crop, widely used in the confectionery and cosmetic industries. The global vanilla and vanillin market reached 2,580 tons and 37,286 tons respectively in 2018. Vanillin is a fragrant compound which is the essential constituent of vanilla.

According to the consultancy firm, ResearchAndMarkets, the growing demand for frozen desserts and bakery products represents a key factor catalyzing this market. Moreover, vanillin has a strong ability to enhance the flavour in food products and has properties such as low-calorie content and high availability of antioxidants. The United States, the European Union and China are the leading buyers. To reduce its dependency, the US is now carrying out studies on growing vanilla in Florida state.

Uganda’s vanilla growing districts are Kayunga, Mukono, Mpigi, Jinja, Kamuli, Buikwe, Bundibugyo, Luweero and Kasese. The Vice Chairperson of the Uganda Vanilla Farmers Association Gladys Nankya said, “Currently there is an exodus of farmers rushing to buy vanilla for planting. As a result, the price for the vines has also shot up from UGX1, 000 (27 US cents) each to UGX3, 000.”

The Uganda Export Promotions Board (UEPB) is aiming at exporting 100 tonnes this year from the 75 tonnes exported last year. On the world market, a kilo is selling at $500 rising from $300 during 2017.

Vanilla in Uganda is harvested twice a year between June-July and December-January. In 2016, total export earnings reached $5.7 million.

Mugisha said he spends much of the time in his gardens or risk thieves harvesting a premature crop. “They come armed with: guns, pangas and rungus (machetes clubs) and will kill anyone who stops them,” Mugisha said.

Some of the other major factors driving the demand of vanilla and vanillin are increasing disposable incomes, rising demand of processed foods, growing applications in the pharmaceutical and cosmetics industry.