Talks on superhighway ongoing as Kenya signs US deals 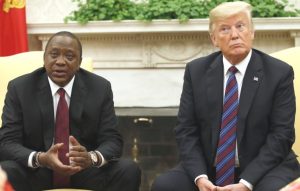 August 29, 2018—Kenya and the United States announced commercial deals worth $900 million early this week, but notably President Uhuru Kenyatta and his host, President Donald Trump confirmed that US conglomerate Bechtel will go ahead to build the proposed $3.5 billion to $4 billion Nairobi-Mombasa superhighway.

In a White House statement, the leaders committed to expand their economic cooperation aimed at making their nations stronger and their citizens more prosperous.

‘Recognizing the importance of high-quality infrastructure, President Trump and President Kenyatta welcomed the proposal by United States engineering and construction firm Bechtel Corporation to build a modern superhighway from Nairobi to Mombasa. Both sides agreed to undertake further consultations to conclude the terms of the financing agreement’ the statement reads in part.

President Trump thanked President Kenyatta for hosting the United States delegation of the Advisory Council on Doing Business in Africa.  To further enhance the economic partnership, the two leaders agreed to establish a United States–Kenya Trade and Investment Working Group to explore ways to deepen ties between the two countries.  Further, the Presidents are pleased to announce that their governments established direct flights between Nairobi and New York City, a move that will expand the economic and cultural ties between the two great countries.