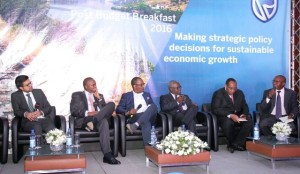 KAMPALA, JUNE 10 – A recurrent twin problem occupying Ugandan planners is the low productivity in the agricultural sector and high unemployment rates in the economy.

As part of efforts to address this challenge, next financial year, the government has committed to operationalising an additional 12 new technical institutes in the far-flung didtricts of Amuria, Hoima, Kamuli, Masaka-Lwengo, Mukono, Nakasongola, Namutumba, Pader, Yumbe, Kyenjojo, Lyantonde and Kiboga. Resources to kick-start another three public universities have also been provided.

Speaking this morning at the Stanbic Bank post- budget breakfast, New Vision Publishing Corporation CEO Robert Kabushenga suggested that the challenge is tied to absence of graduate labour in the agricultural sector. Kabushenga argues that the solution is to create incentives that will move the army of un-or-underemployed graduates out of the artificial comfort zone of urban life, itself subsidised by the labour of exploited peasant producers, into participation in the grit of agricultural production. That Kabushenga reasons would help yields multiply because the primary producers will have access to and accept modern production techniques.

Both Kabushenga and the government are spot-on as far as diagnosis of the problem goes but their prescriptions fall short of what is required.

This publication believes that the opportunity for improving agricultural productivity is hidden in the millions of young Ugandans that fail to make the transition from primary to secondary school.

A major shortcoming of our education system is that it divorces learners from the land. Because life is deplorable in our rural homes, parents take their children to school in the hope that education will give them a shot at life outside the back-breaking and poverty ridden routine of rural life. Whether they succeed or not, the divorce from the land starts the moment learners are exposed to urban life, either through a boarding school close to the nearest big town or when they get whatever pretence of a job after school, in  a town.

On the other hand, the failure to transition to the next level disabuses most primary school dropouts of such notions. Since they have already achieved basic literacy, investment in vehicles that transfer basic agronomy to this group, coupled with a reorganization and rationalisation of agricultural value chains, might deliver results faster, and cheaper. It is the success of this group that will inspire graduate labour to look at agriculture with a different mindset.