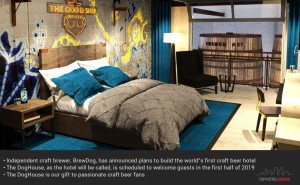 February 27 -Independent craft brewer, BrewDog, has announced plans to build the world”s first craft beer hotel, and will launch an immersive craft beer hotel & brewery expansion at the brewery”s headquarters in Aberdeenshire, Scotland. The DogHouse, as the hotel will be called, is scheduled to welcome guests in the first half of 2019.

The 26-room DogHouse will feature beer taps in the rooms, a built-in shower beer fridge, and rooms will overlook the brewery itself.

In addition to the construction of the hotel, BrewDog is expanding its brewery to include a 300 hl brewhouse and a canning & packaging hall.

The brewery expansion comes soon after the opening of BrewDog’s sour beer brewing facility: The Overworks, which opened last month.

The new brewhouse is also expected to be completed by the end of the year.

Guests will be able to watch brewers at work from rooms overlooking the new facility, providing the ultimate immersive beer experience.

The hotel and brewery will be built on a 3.25 acre site adjacent to BrewDog’s current 1 million hl brewery.

The site has been purchased from screw jack manufacturer Power Jacks, who will move to a new purpose- built facility later this year.

The funding for the hotel and brewery expansion has come from BrewDog’s record-breaking Equity for Punks crowdfunding initiative, which has seen the Scottish brewery raise over £53 million since 2009 from more than 73,000 passionate craft beer fans.

Priority booking for The DogHouse will be given to “Equity Punk” investors.

In October last year, the brewery launched its fifth round of Equity for Punks, looking to raise at least £10 million, with a stretch goal of up to £50 million, in order to further its global expansion.

This includes planned construction of new breweries in Australia and China, the opening of 15 new craft beer venues in the UK, increasing production capacity in its UK brewery, and the creation of a dedicated craft beer TV network.

Equity for Punks V has so far raised over £12.5 million from more than 27,000 investors across Europe, and hit its initial £10million target ahead of its initial deadline in January. Given the demand, the raise was extended and is due to close on October 15, 2018.

BrewDog cofounder James Watt said: “The DogHouse is our gift to passionate craft beer fans making the pilgrimage to our brewery in Aberdeenshire. The idea of opening a beer hotel has always been high on our agenda, and now we are finally able to realise that dream, right here at our HQ. This will be the ultimate destination for craft beer fans seeking hops with their holidays. This is a beer Nirvana.”