April 24, 2018—Some $12 million is being invested among small and medium enterprises (SMEs) involved in […]

April 24, 2018—Some $12 million is being invested among small and medium enterprises (SMEs) involved in mining as a direct result of findings from the Baseline Assessment and Value Chain Analysis Program Report on the Development Minerals sector in Uganda. 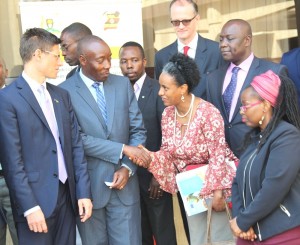 PS Kasande is greeted by UNDP’s Worku during a break in the five-day workshop as other officials look on.

Development Minerals include industrial minerals, construction materials, dimension stones, and semi-precious stones among others which are mined and used locally. The report was launched in March.

Financed by the European Union(EU), experts from the United Development Program (UNDP)  found that artisanal mining in Uganda was growing with over 390,000 people, 44% of these being women, directly benefiting from the sector while another 2.5 million people, 7% of all Uganda’s population, were benefiting indirectly.

Following the release of the report, the African Caribbean and Pacific (ACP)-EU Development Minerals Program in partnership with the African Guarantee Fund (AGF) for small and medium sized enterprises launched an inclusive financing for SME’s in the development minerals sector worth over $12 million.

UNDP and its partners have organized a five-day workshop for financial institutions and other players in the mining sector with the aim of improving capacity of these institutions on how they can finance SMEs through grants.

Thomas Tiedemann, the Head of Cooperation at the EU Delegation in Uganda said access to financing will help in improving the mining sector especially for development minerals sector which has the potential to create jobs for the youth and women.

“Access to finance is a major challenge to SMEs in the Development Minerals sector. EU and partners like ACP, UNDP, Government of Uganda and AGF are stepping up to support thriving SMEs in the sector and we hope to see an improvement in how these SMEs operator,” Tiedemann said.

The workshop which opened on Monday, has officials from the Ministry of Energy and Mineral Development, the EU Delegation in Uganda, AGF, UNDP, Bank of Uganda and CEOs of  several financial institutions. It is expected to discuss and ways towards improving the working environment of small miners, the policy and regulatory environment and how these miners can easily access finances/credit from financing institutions to develop and improve their mines as a way of earning more from this sector. 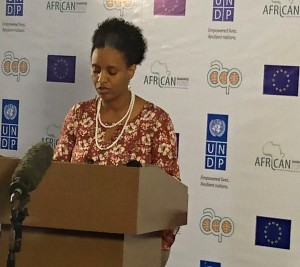 Worku said the Development Minerals sector has the potential of creating more jobs and reducing overall poverty in rural areas.

Yemisrach Worku, a Senior Economist at UNDP said, “Since Development Minerals are mined locally, they have the potential to generate more local jobs, with a greater impact on poverty reduction. There is immense potential in the sector and SMEs. Financing mechanism and sector specific support will ensure a thriving high impact on SMEs,” she said.

Patrick Lumumba, Capacity Development Officer at AGF said the Fund was interested in SMEs because they are the driving force for developing economies like Uganda. “AGF’s belief is that SMEs are the driving force in creation of jobs and inclusive growth has lead to leveraging $1 billion to ease their access to finance,” he said.

Robert Kasande, permanent secretary in the energy and minerals development ministry said the government was committed to helping the sector grow by putting in place new regulations that will ease the working environment for both the miners and those interested in financing them.