June 4, 2018— Borrowing a leaf from the Americans, British and French or merely flexing its […]

June 4, 2018— Borrowing a leaf from the Americans, British and French or merely flexing its muscles, China wants to underpin its business presence in Africa with greater military cooperation.

In 2016 Chinese companies, which Mckinsey estimates to be some 10,000, invested $3.2 billion in various ventures across the continent. 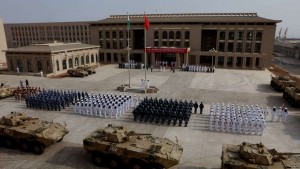 Between June 26 and July 10, the Chinese Ministry of National Defence will host a security forum in Beijing with invitations going out to most of the African governments where it has a diplomatic links. As the most generous bilateral donor in development assistance, China is not expecting many rejections of their invite for the talks.

China is presently sub-Sahara Africa’s top trading partner at just over $150 billion and its first military outpost on the continent located in Djibouti was officially opened last year.

A contingent of the Peoples Liberation Army is stationed at this strategic site able to monitor a vital shipping lane and which China considers a crucial piece of its Belt and Road Initiative. The American and French bases are not too far off.

According to Xinhua, the forum aims to deepen the partnership between China and Africa, promote building a shared future for China and Africa, and meet the needs of Africa’s new security situations and China-Africa defence cooperation. At just over two million personnel, China has the largest military in the world.