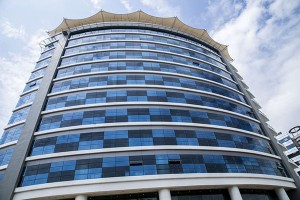 October 12 – The number of branded hotel rooms in Uganda will cross the 1000 mark for the first time during 2019 Q1, as a number of significant projects under development come to completion. The $54 million Pearl of Africa luxury hotel opened doors this month with 296 rooms after eleven years of construction. The property that was initially supposed to operate under the Carlson Rezidor banner will be managed by South Africa based One & Only group that also operates a $1500 a night lodge in northern Rwanda.

After a long hiatus, the $63 million Kampala Intercontinental is back on track with official opening expected during the first quarter of 2018 with 320 rooms on offer. A 195 Radisson Blu is also expected to open in Kampala during 2018 Q1.

Marriot, which recently took over Protea Hotels will add another property to its stable early next year, the 105 Protea Naguru. The 80 room Protea Hoima, currently under construction at a cost of $6 million is tentatively expected to open for service during 2019 Q1, bringing the number the number of properties under its management in Uganda to four.

After a false start that saw it pull out of a contract to manage the Pearl of Africa property, the Hilton Group is back with the Hilton Garden Inn that will open during 2018 Q1. The 96 room property that will be targeting, holiday, business and conference traffic, is nearing completion in Kamwokya at a cost of $8 million.

These openings have broken the drought that has seen global brands eschew Uganda in favour of destinations like Rwanda, Ethiopia, Kenya and Tanzania in the region. Both the Marriot and Carlson groups are managing mint new properties in Rwanda where the latter has two properties – the Radisson Blu and the Park Inn by Radisson, both in Kigali.

The Kampala Sheraton is the only property managed by Marriot in Uganda.

While local property developers have often found it unattractive to work with global brands because of their stringent quality demands and hefty management fees, they are seen as important for new destinations to break into the global travel market.

After a period of hesitation, the Mukwano group has entered a management contract with the Hilton group which will be managing Mukwano’s Ubumwe Hotel in Kigali under its Double Tree brand.

While individual Ugandans such as Karim Hirji under his Imperial Hotels brand and Sudhir Ruparelia’s Speke Group between them control more than 1000 hotel room at a number of prime locations, raising them to the standards demanded by global brands would require new investment. Coupled with management fees, this has kept them off the radar of global brands.