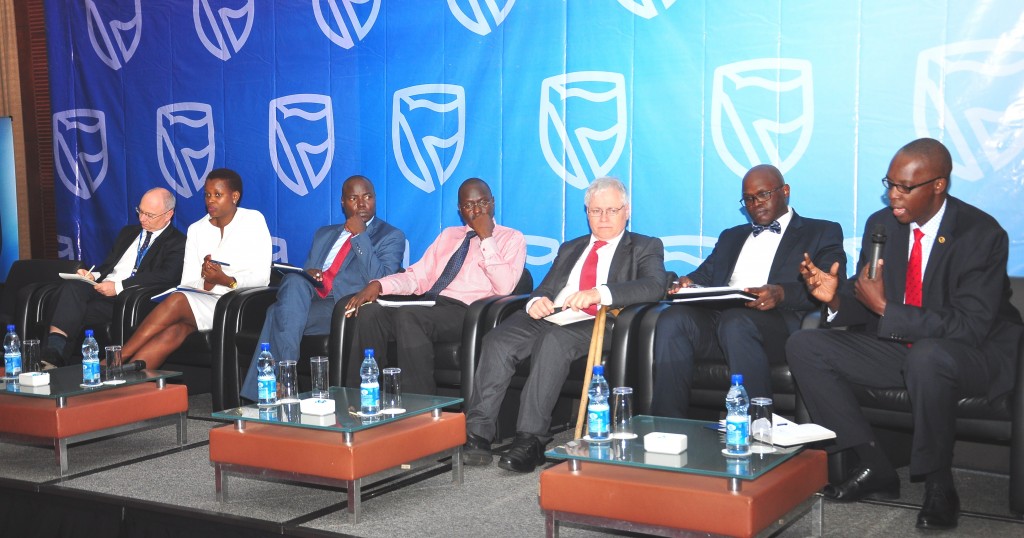 “We are very excited the agency regulations have finally been assented to and that agency banking will become a reality in Uganda. The agent banking model will allow Stanbic and all other commercial banks to extend our reach while reducing our cost of doing business. This means we will be able to serve a lot more customers and achieve our collective goal of increasing financial inclusion,” Patrick Mweheire, the Chief Executive of Stanbic Bank Uganda (SBU) said on Tuesday.

SBU, together with the Uganda Law Society hosted an Agency Banking conference to discuss the potential implications of this new financial channel to the legal fraternity, financial stakeholders and potential agents.  The well-attended conference was held following implementation of the Financial Institutions (Amendment) Act 2016 and comes shortly after signing of the Agency Banking regulations by Emmanuel Tumusiime Mutebile, the Governor of the Central Bank last week.

Mweheire said, “As a bank we have been preparing for agency banking for some time now and have invested significantly training potential agents, developing the necessary infrastructure and acquiring the technology needed to run a safe and efficient service.

“We are confident agency banking will be a great success in Uganda given the unacceptably low penetration levels of formal financial services and the nature of the model which caters more effectively for the needs of Ugandans at the bottom of the pyramid who constitute the majority of the unbanked population,” he said.

According data from the finance ministry, Uganda with a population of 35 million people has just four million bank accounts representing just 33% of the 12 million who are bankable. This is shortfall compounded by the fact that almost 62% of Uganda’s population having no access whatsoever to financial services, indicates that the country has an urgent need for new ideas and alternative banking channels.

Representing Mutebile at the event as Chief Guest, the Executive Director Supervision Mrs. Justine Bagyenda said, “We expect Agent Banking to be a catalyst for financial inclusion and the deepening of the financial sector.  We expect that more of the unbanked will be brought into the banking system, thus increasing the outreach of financial services, particularly in the rural areas by addressing the major barriers to banking. These include access to and affordability of banking services, as well as identification of customers.”

Referring to the platforms, banks and their agents will be using, Wilbrod Owor, the Executive Director of the Uganda Bankers’ Association (UBA) said, “All commercial banks will roll out Agent Banking through a one shared platform supported by agents spread across the country. Our objective as UBA and the entire banking community is to drive financial inclusion by increasing outreach to underserved/unbanked population with reduced cost of expansion.”

He said, “To that end, UBA under the joint venture partnership with Eclectics International, will design, develop, deploy and operate the inter-operable platform that connects all member banks to the agent network spread across the country.”

Thanking participants for attending the conference, Stanbic Bank’s Head of Legal Affairs and Company Secretary Mrs. Candy Wekesa Okoboi said their presence was sufficient evidence of the importance they placed in the development.

She said, “On behalf of Stanbic Bank, I extend my gratitude to each and every one of you for joining us here today to participate in a conversation that is of great significance to our country’s economic future. Financial inclusion as the discussants have explained has the power to bring a large portion of Ugandans into the fold and therefore we must prepare ourselves to manage and mitigate the attendant legal challenges of this inclusion in order to pave the way for the expected financial and economic benefits.”