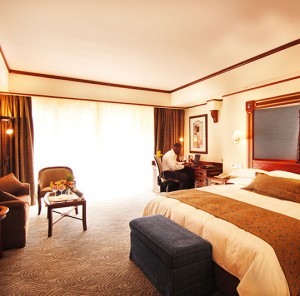 The hotel has been nominated in two categories for the World Travel Awards due in Kigali at the end of the year.

“We are very delighted and quite positive with these nominations. I believe we are the best hotel in these categories We want to thank the team at World Travel awards for organizing these awards and wish all the nominees best of luck. I encourage all our clients and the general public to vote for us,”  Jean Philippe Bittencourt, the Sheraton Kampala General Manager said. The hotel is celebrating its 50th anniversary this year.

Country awards are based on a criteria that mostly takes into account views expressed by the travel and tourism industry on the range of products and services offered by an establishment. The annual final shortlist of nominees for each country award is reached via the following criteria: the winner and two runners-up of the previous year’s automatically get nominated however they are again vetted after which must be approved to be nominated. Besides being self-nominated, they are vetted and approved basing on WTA commendations.