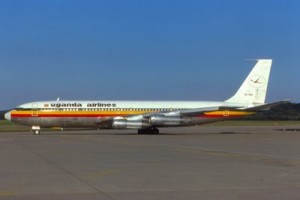 In the good old days, the flying crane regularly made trips to Europe and Dubai before restrictions on noisy engines were imposed.

June 1—When management at Rwandair cheekily had their new Airbus A330 make a stopover at Entebbe International Airport last year, there were some rather anguished, if not wounded expressions among the crowd present. Gosh, if a small country like Rwanda could manage to maintain a national carrier, why not Uganda?

Nearly 20 years after the demise of Uganda Airlines, the momentum to revive this venture has picked up with more urgency since that day in September 2016. But it still does not change the fact that the available money to get operations underway is far from adequate.

Yet the airline business is very competitive with high overheads and often slim margins.

The National Planning Authority and Ministry of Works and Transport have suggested a figure of $400 million as initial capital investment. Others say three times that amount is a more realistic number. In the meantime, the government is looking for a transaction adviser who will basically verify the viability of the whole project.

National pride is powerful incentive. Doubters have been unceremoniously swept aside. Seeing the flying crane once again on the tail fins of an aircraft fleet, may just be the spur to tourism and increased foreign investment that we need. Besides, too frequently Ugandan travelers have suffered at the hands of other carriers who can afford to price their fares on the basis of ‘take it or leave it’.

However before we all get carried away, there is also the often forgotten saying, ‘pride comes before the fall’. Like the first Uganda Airlines, there have been a host of other African carriers that ended up grounded then grinded out of existence. Governments kept throwing cash at bad management underpinned by political appointees more interested in the perks than performance. This encouraged all sorts of abuses and the ultimate one of VIPs preferring not to pay.

Africa’s aviation history is littered with fallen giants. Air Afrique, Nigerian Airways, Ghana Airways, Air Gabon, Botswana Airways, Cameroon Airlines and Air Senegal. For the record, further afield we used to have Sabena, Swissair, Pan Am and TWA. Their problems were somewhat more complicated than their African counterparts but all shared one.

It was market forces that had the final say in these airlines’ collapse and in reviving Uganda Airlines any enthusiasm that ignores this factor should be tempered. Is there a market for a revived Uganda Airlines to exploit or are we merely wishing for it and let’s not forget most Ugandans will not be able to afford a ticket.

On the other hand, there are examples like the international award-winning Ethiopian Airlines that survived marxism and today flies to nearly every corner of the globe. This is not all—Ethiopian Airlines is 100% owned by the government. This is what impresses people the most, but Ethiopian Airlines senior management will also tell you that their operations are run on strictly commercial lines with the minimum of government interference. Having been around for more than 60 years, apparently the formula is working out very well, because Ethiopian Airlines profits were up in 2016.

Several aviation officials from different African countries have been trekking to Addis Ababa to either learn how Ethiopian has done it or asking for help in re-establishing national airlines. Others want Ethiopian to take up equity in their carriers.

As things now stand, it looks like the Uganda government wants to take on most of the risk in reviving the UQ call sign.  Multilateral donors want nothing to do with it. Not surprisingly, several top technocrats in the finance ministry and Bank of Uganda are quietly aghast at the thought. Why fund vanity when there are far more pressing things that need to be done? Moreover, this particular toy will consume huge amounts of foreign exchange.

Recently, Gen. Katumba Wamala, a state minister in the works ministry, raised another important point. He reminded a parliamentary committee that the airport handling services at Entebbe International Airport are in private hands. This will deny the revived carrier revenue derived from providing ground services to other air operators, not to mention the nuisance of also having to pay themselves. ENHAS has a very good thing going for itself. Sam Kutesa, a cabinet minister, the ENHAS major shareholder and a brother-in-law to President Museveni, would need some powerful convincing to fully let go of this high earning business.

What has to be decided by the government and soon, is whether reviving Uganda Airlines is really a priority and how much money it is willing to push at it?  Buying planes is the easy part. Keeping them up in air with load factors of above 60% or 70% is not. Nor will the negotiations for landing rights despite talk of ‘Open Skies’.

If the whole project is simply about prestige, (the likes of Emirates and Qatar) rather than profit, maybe it is better we wait for the cushion of oil revenues and spend the little that we have now on other things. Perhaps a modern public transport system for Greater Kampala. Sometimes, keeping up with appearances is not worth the effort.