No short-cuts for Ugandan suppliers aiming for oil deals 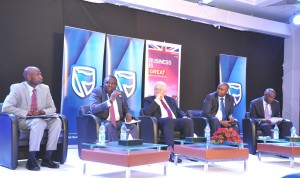 Rubondo (left), Mugerwa, Haymes, Mweheire and Dr. Karuhanga were the panelists to discuss the theme, ‘Unlocking opportunities in the oil and gas supply chain’.

November 21—There will be no short-cuts for Ugandan suppliers aiming  to win contracts in the emerging oil and gas industry where development expenditure is expected to top between $10 billion and $15 billion in the next couple of years.

“Oil and gas is not going to lower standards to accommodate Ugandans,” Jimmy Mugerwa, the General Manager of Tullow Oil Uganda said during a panel discussion on the theme, ‘Unlocking opportunities in the oil and gas supply chain’. He said interested local companies must step-up their game and keep abreast of all the relevant standards and other requirements needed to be eligible.

This was a session during the suppliers conference hosted by Stanbic Bank Uganda (SBU), the Energy Industries Council and the British High Commission in Kampala to gain some insight into how UK companies can help Ugandan suppliers exploit the country’s estimated two billion barrels of recoverable oil. The government wants commercial production to start in 2020 and currently the infrastructure to make this happen is being put in place.

In his introductory remarks SBU Chief Executive, Patrick Mweheire said exploiting the oil reserves can positively transform Uganda’s economy, with GDP growth having plummeted to less than 5% in recent years compared with the high rates seen in the 1990s, “There is enough for everyone. The more the merrier. But what is important that we get the technical know-how to do what needs to be done by match-making for this expertise,” he said.

Simon D’Ujanga, the state minister for energy, said in 2018, the government expects the engineering, procurement and construction phase of developing Uganda’s oil to pick up pace. “As the Ministry we are facilitating national participation by drafting a content policy. Government has already put in place measures to ensure Ugandan firms actively participate.”

However D’Ujanga conceded local participation has been hampered by the limited access to finance, a shortage of the required skills, other capacity constraints, a small industrial base and the general inability to compete with international suppliers.

Lord Dola Popat, the British Prime Minister’s Trade Envoy to Rwanda and Uganda thanked the SBU and the UK Department for International Trade for arranging the conference. He said British expertise is already on the ground working on the proposed Kabaale International Airport in western Uganda in proximity to the oil reserves. “The UK has companies that offer world class standards and we want them to come to Uganda so that knowledge transfer is done and more jobs are created in Uganda,” he said.

Phil Haymes, an oil and gas specialist with the Department for International Trade, said although his main job is helping British companies get business in other markets like Uganda, his experience has taught him that the most important thing  for any oil producer is developing a skilled workforce and a competent supply base. 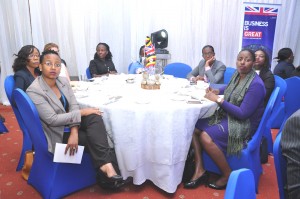 A audience was made up of a cross-section of people directly or indirectly involved with Uganda’s oil and gas industry.

“Always look at the demand side both nationally and internationally and make sure your expectations are anchored in reality” Haymes said. He said 80% is planning and preparation to understand demand and supply.

He advised the Uganda government and regulators to benchmark local firms by inspecting and pre-qualifying them. Match-making some of the stronger Ugandan suppliers with reputable global names can also strengthen local capacity for faster exchange of know-how. He said setting up enterprise centres to train SME owners is also an useful way to get them involved.  “Focus on areas of greatest spend because that is where there is the highest opportunities”.

Panelist Ernest Rubondo, the Executive Director of the Uganda Petroleum Authority said the government started early in filling the skills-gap, but there is still some way to go. “We started early. A skills development process is in place with input from various individuals and organisations, but our focus is on the gaps and orient many of these skills to the oil and gas sector by certifying them,” he said.

“Many Ugandans don’t know as much as they think. Get advisers to set up corporations. We don’t need to re-invent many of these things ” Tullow’s Mugerwa said

On the question of local content, it was revealed that the issue is once again undergoing a review, but Rubondo said “Our objective is to deliver value to Ugandans. In this regard, the operationalisation of the law is intended that 70% of employees in the sector are Ugandan and 70% of the materials used are sourced in Uganda.”

However Elly Karuhanga, the President of the Uganda Chamber of Mines and Petroleum said “Local content laws must attract foreign capital. Legislator should be made aware of what is at stake.”