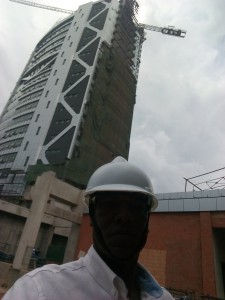 May 11, 2018 – A glut in corporate rental space is likely in Kampala as thousands of square metres of office space approach vacancy when one of Uganda’s biggest tenants, the Uganda Revenue Authority URA, moves into their new state of the art headquarter building at the end of August.

Speaking during an engagement with digital media operators today, URA Spokesperson Mr. Vicent Seruma said the tax collector would consolidate the bulk of staff in the greater Kampala area at the headquarters, leaving only a handful of small operational units in select locations.

That would mean giving up occupancy in the thousands of square metres, a move whose impact on the corporate rental market is not yet known. Prominent victims include Knight Frank managed Crested Towers and Nakawa Business Park where URA currently occupied ten and three levels respectively.

Crested Towers has been seeing weak sales for the past five years with vacancies created after tenants, notably Stanbic surrendered space on the Short Tower. URA’s departure will bring unsubscribed space on the building close to 3000 square metres.

Seruma said the new 23 level tower whose UGX 142 billion construction bill has been fully funded from internal resources, has been designed to accommodate 1700 workers. The number includes redundancy to accommodate growth headcount over the next couple of decades.

The building has 26,000 square meters of usable space, uses natural air flow save for the meeting rooms and a couple of other areas. It has also got a satellite parking tower with a capacity for 360 cars, space for restaurants and a nursery for lactating mothers.

URA has set August 31 as the tentative date for handover. Furniture at current locations will be redistributed to upcountry offices while any surplus will be donated to schools within the vicinity of upcountry offices.