May 17, 2017 in Infrastructure, Investment, Transport by Editor

May 17— A mass of granite rock sits in the path of the Kampala-Entebbe Expressway project and together with delayed compensation payments will mean the $475 million dual-carriageway may not open on time as scheduled later this year. 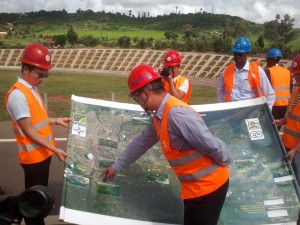 CCCC officials say the grid-lock often found along the Kampala-Entebbe highway will be a thing of past once the new route is complete.

Li Jincheng, the China Communication Construction Company (CCCC) country manager said, “This rocky obstacle comes in rapid succession of the compensation delays due to lack of required genuine documentation. According to the agreement, the government is supposed to foot the bills incurred as a result of the delays.”

CCCC were chosen as the contractors, but this rock is not the only obstacle they have faced. There was a 15-kilometre swamp that the contractors overshot by sinking pillars as deep as 50 metres to avoid causing environment hazards and degradation. Work on the expressway got underway in 2012.

A soft loan from China’s Exim Bank is supposed to cover the bulk of construction costs while the government caters for counterpart funding including compensation payments and tax waivers. Anticipation for completion of the project has been growing although many people are still unaware that this will be a toll-road.

The present Kampala-Entebbe single lane highway is already undergoing some strain due excessive traffic associated with new real estate developments along the vicinity of the highway and it being the sole access route to the international airport.

The proposed new Kampala–Entebbe Highway forms a crucial part of the government’s overall strategy for de-congesting Kampala through construction of an inner beltway comprising the Kampala Northern and Southern Bypasses. The Northern Bypass is currently being improved by expanding the single lane sections into double. The Southern Bypass is still on the drawing board while money is sourced.

The Kampala-Entebbe Expressway connects with the Kampala North Bypass at Busega and with the existing Kampala – Entebbe road at Abayita Abababiri.