August 1—Next month, the Uganda Chamber of Mines and Petroleum (UCMP) will hold its first ever […] 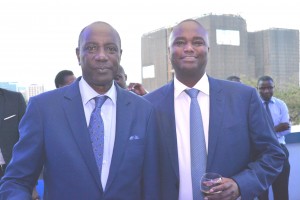 Dr. Karuhanga and Mweheire are trying to make sure as much of the money being invested in the oil and gas sector ends up in as many Ugandans’ pockets as possible for services rendered.

August 1—Next month, the Uganda Chamber of Mines and Petroleum (UCMP) will hold its first ever skilling convention as part of the process to ensure higher levels of local content in the evolving oil and gas sector. Basically, this involves the training of people in multiple skill-sets, allowing for more versatility and productivity.

“There is a lack of depth in a number of very remedial skills along the value chain; be it driving, wielding fabrication and many others. These gaps can be filled with training and skilling and a little bit of guidance. This convention is our first step in making sure that Ugandans are able to tap in the opportunities,” Patrick Mweheire, the recently elected UCMP Vice Chairman has said. He is also the Chief Executive of Stanbic Bank Uganda (SBU).

The convention, which will be open to all-comers, both public and private, together with any other interested parties, with plans to be involved in potentially one of the key drivers of Uganda’s future economic growth. Estimates have put the country’s reserves at six billion barrels of crude oil, found  mainly in western Uganda. Just over two billion is of this is recoverable.

The convention will complement other efforts by oil companies during the past couple of years as operations move to the production phase. Between $8 billion and $15 billion is projected to be spent over the next 10 to 15 years.

UCMP wants to play a significant role. Mweheire said the convention will help Ugandans prepare themselves for bigger and better job opportunities in the oil and gas sector as the country prepares to pump it first commercial oil in 2020.

“Before the real extraction of oil begins in 2020, a lot of money is going to be invested in the sector, over $10 to $15 billion. We want to see what we can do as a Chamber to unblock particular areas that will allow Ugandans to freely tap into oil and gas sector opportunities.

He said, “As the Chamber, our role is to promote encourage, protect and foster responsible exploration and service delivery in the extraction sector.  We want use our experience to help as many Ugandans as possible to work in the oil and gas sector through skilling and training.”

Dr. Elly Karuhanga, the UCMP Chairman said, being a new and specialized industry in Uganda, the oil and gas sector is still dependent on foreign workers  He said few Ugandans have been able to come up and take up the job slots due to lack of skills as well as information about the available opportunities.

“We have to find a way of keeping a significant percentage of the oil investment in Uganda. The Chamber will continue engaging the State through a special committee to make sure that these issues are addressed in the upcoming local content law to make sure that Ugandans participate gainfully in the sector,” he said.

UCMP is due to participate in a similar convention in Tanzania during January 2018. According to the 2014 industrial baseline survey, the petroleum sector will provide between 100,000 to 150,000 direct and indirect jobs. However there are still barriers, like limited information, lack of skills, poor infrastructure and often excessive bureaucracy in government that limit Ugandans’ chances for getting involved in the sector.

UCMP is also organizing its annual mineral wealth conference that will take place this Friday.