June 21, 2018—There is a common misconception that commercial banks in Uganda have limited interest in […]

June 21, 2018—There is a common misconception that commercial banks in Uganda have limited interest in financing farming or agricultural projects, Richard Wangwe writes. 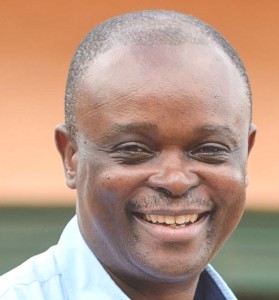 Wangwe said 50 pc of Stanbic’s branches are located upcountry in the heartland of Uganda’s agricultural areas.

After all, the sector isn’t efficiently organized, is largely uninsured and dominated by small-holders with low income and therefore one would assume are unattractive to banks.

While it’s true that most commercial banks in Uganda are not ideally structured to finance individual small-holder farmers directly, the reality is that they still play critical roles within the sector making them an indispensable part of the overall ecosystem.

First and foremost their presence in rural areas where the economy is largely driven by agriculture means they are heavily involved, (tellingly, 50 pc of all Stanbic branches are located upcountry).

This role is accentuated during peak harvest and trading periods when, banks provide large scale buyers and aggregators with the much needed short term facilities in form of advances, revolving lines of credit and unsecured loans used to purchase agriculture produce from the thousands of small holder farmers.

In Lira district for example, during the peak trading period, Stanbic Bank makes available about UGX 20 billion ($5.2 million) per month in revolving credit to the oil seed value chain alone.

Secondly banks facilitate value addition by offering the long term loans used by entrepreneurs and investors to build factories, storage facilities and packaging outlets. This is key for the national economy because it helps the country generate exports and bring in much needed foreign exchange.

In 2017, Uganda earned $500 million from exports of agricultural products, and while someone might imagine the bulk of this came from large scale exporters, to the contrary much of this was generated by mid-size businesses.

One such company is Rusekere Growers Tea Factory, owned by Erisa Kakyomya. He has prudently used a series of loans from Stanbic and managed to scale up his operations from 1.5 million tonnes of processed leaf in 2012 to 3.5 million today the majority of which is exported. Rusekere Tea Company employs 250 direct workers 1,200 indirectly through out-growers and other service providers. 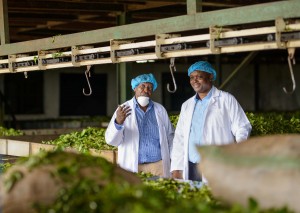 Wangwe (right) on a routine visit to one of Stanbic’s clients, Erisa Kakyomya, who has with the bank’s support, doubled processed tea leaf production from 1.5 million to 3.5 million tonnes.

Thirdly commercial banks are instrumental in the modernization of agriculture across the country, by enabling automation and mechanization to take place. Banks provide farmers with Vehicle and Asset financing making them more efficient and productive allowing them to scale up their operations to meet market demand.

Such facilities include leases for farm equipment, loans for the purchase of trucks, delivery vans, hire of plant and machinery among many others.

Lastly in a role that is often overlooked, commercial banks through their treasury departments provide advice to farmers and other sector players dependent on imported agric inputs on future exchange rate fluctuations helping them save money by hedging in forward rates for extended periods. This significant for such importers when you consider the fact that the Ugandan shilling has lost 30% of its value against the US dollar over the past 18 months.

Looking to the future, the advent of Agency Banking and Bancassurance will definitely be a game changer as far as the relationship between banks and farmers is concerned, given that formal financial services will now be a lot closer to the people. In theory this should make it easier for them to access small loans and other financial services which is a vital prerequisite to bringing them out of poverty.

In order for this to happen successfully however,a conscious effort needs to be made by the banks, agricultural stakeholders and the government to increase financial literacy which is still one of the major hindrances towards driving the uptake of formal financial services.

Richard Wangwe is the Head of Agriculture, Stanbic Bank Uganda