But declining yields need to be countered by better eco-system resilience and adaptive capacity KAMPALA, JANUARY […] 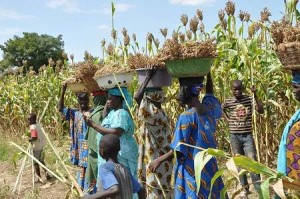 KAMPALA, JANUARY 11- Contrary to the doomsday scenarios that have often been associated with climate change, rising temperatures could be the trigger that steers large parts of Africa towards achieving food security over the next two decades.

In a startling scientific paper, scientists at the Association for Strengthening Agricultural Research in Eastern and Central Africa ASARECA – Kizito Kwena, William Ndegwa, Imad Ali-Babiker and Hezron Mogaka, argue that the flipside to rising temperatures is that the COMESA sub-region will likely get wetter mid-century. Citing separate studies by the Food and Agriculture Organisation FAO and the World Bank, the researchers say the projected 2C° increase in surface temperatures will result in an 11 percent increase in rainfall over the sub-region.

“As unfamiliar as this counter-narrative might seem, climate change presents the region an opportunity to think and act differently, to change the way it views growth and interacts with the environment,” says part of the paper titled – the curse of food insecurity and climate change in Africa.

Arguing that the 2025 zero hunger target set by African leaders is achievable, they say governments in the region would need to invest at least 10 percent of their GDP in agriculture and direct resources into Climate Smart Agriculture.

According to Dr. Kwena, while most climate models remain optimistic about the rainfall situation in the Eastern Africa region where vast areas of land are arid or semi-arid, the challenge is that governments may not be prepared to maximize the associated benefits.

“That is a huge opportunity considering the vast areas in the region that arid to semi-arid lands occupy. The challenge is how we harness this opportunity. We are saying that with Climate Smart Agriculture, it is possible to harness this opportunity but unfortunately, most climate smart interventions limit us to a farm or plot level to the extent that the desired impact we want to see for the whole region may not be realized,” Kwena tells 256BN cautioning that there was a need to apply climate smart agriculture technologies on larger scale, possibly on a landscape, village , community, or even a county scale.

These views stand in sharp contrast to other scenarios which predict that in many parts of Africa, every 1C° increase temperature will result in a 5 percent decline in food yields.

Like his colleagues however, he comes to the same conclusion about the solution. “With this kind of forecast, it is important to invest in making our cropping systems better adapted to a warming world. Such climate smart interventions could save billions of dollars and millions of lives,” Wachira counsels.

Climate Smart agriculture her argues, will enhance the resilience of food systems while also contributing to reduction of emissions. He says for instance, every dollar invest in agricultural research and development results in a 68kg reduction in emissions of carbon dioxide while a 1 percent increase in agricultural water productivity frees 24 litres of water per person per day.

“With Climate Smart Agriculture, the challenge of climate change can be turned into an opportunity,” he concludes.

Wachira further observes that despite its potential Africa remains a net importer of food even as other regions of the world trebled output. In the East and central African sub-region food crop yields have stagnated over the past half a century leading to sharp declines in per capita food production with attendant spikes in poverty and hunger.

Cereal imports into Africa jumped tenfold from less than 5 million tons a year in the 1960’s to more than 50 million tons a year by 2005, a situation professor Wachira partly attributes to receding total factor productivity which shrank by 0.28 percent between 1970 and 2005.

While countries such as Rwanda, Sudan and Ethiopia have experienced big increases in agricultural productivity over the past ten years, these remain too few to have an impact on the aggregate picture. Wachira points to market failures and overdependence on rain fed agriculture as the major factors behind the underperformance of African agriculture a situation he warns, can only be exacerbated by climate change.

The continent could also see an upsurge in conflict as communities compete over the use of natural resources in the face of crop failure, livestock deaths and loss of agricultural based incomes.

“There is therefore an urgent need to put in place measures to enhance community and ecosystem resilience, adaptive capacity and coping mechanisms towards changing and varying climatic conditions,” he concludes.