March 6—-China is Uganda’s leading bilateral creditor taking up 20% of the estimated $10 billion total foreign debt while much of the rest is owed to the World Bank Group, predominantly the International Development Association (IDA) which lends on concessional terms. 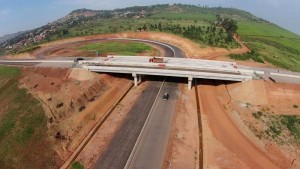 The much anticipated Kampala-Entebbe Expressway, due for completion by the end of the year, will cost nearly $500 million by the time its open for toll traffic.

The Chinese also provides soft loans, but details are rarely made available, because Beijing prefers a confidential government-to-government arrangement that keeps all conditions of the loans under wraps except perhaps the amount.

During financial year (FY) 2010/11, total Chinese loans to Uganda only made up 3% of the total, but the steady rise during the past seven years reflects increased Chinese involvement in revamping Uganda’s infrastructure. High profile projects nearing completion within a year include the 600MW Karuma hydro-electric dam, 180 MW Isimba hydro-electric dam and the Kampala-Entebbe Expressway. The state-owned China Eximbank is the main lender.

According to the finance ministry, the latest the results of a Debt Sustainability Analysis (DSA) show that Uganda moved from low to moderate risk of debt distress. Despite this, external public and publicly guaranteed (PPG) debt was found to be sustainable in the medium and long term.

There has been an increase in vulnerabilities compared to previous DSA assessments, and the major risks to the outlook relate to the poor performance of exports as well as an increased rate of debt accumulation, particularly on non-concessional terms

Domestic debt in foreign currency terms remained unchanged at $3.2 billion (despite an increase in shilling terms) due to a 5.5% depreciation of the shilling between June 2016 and June 2017.

Stress tests on total public debt indicate significant risks related to non-debt variables, particularly interest rates and the exchange rate. This underscores the need to borrow on concessional terms as much as possible.

A key concern is the slow growth in exports, which represent an important source of foreign exchange with which the government meets its external debt service obligations. The stress test on the PV of External Debt to Exports significantly breaches its threshold from FY2019/20 until FY2024/25, causing Uganda to decline from low to moderate risk of debt distress.

Government will continue efforts towards improving project implementation across the entire project cycle, including the production of high quality feasibility studies and proper, timely management of the land acquisition process. Untimely project implementation tends to lead to cost overruns and delays as well as reducing the benefits of infrastructure projects, which undermines economic growth and affects the country’s ability to repay its debts.

The finance ministry says IDA`s share in total public debt has been on a downward trend while China’s share has been increasing. Debt owed to IDA has declined from 61.9% of the total stock in FY2010/11 to 45.2%. Over the same period, debt owed to China has increased from 3.3% to 20.3%.

Further, the short-term external debt maturities as a percentage of reserves increased from 2.0% in June 2016 to 4.8% in June 2017 mainly on account of the controversial $200 million PTA (Trade Development Bank) loan that legislators claim was misused after being misled by the finance ministry.