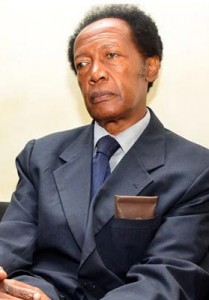 Lwamafa looking resigned to his fate at court this morning

The three were charged with making budgetary provisions for Ushs 88.4 billion in NSSF contributions for public servants yet they knew they were not eligible to contribute. The money was later embezzled by the trio.

“Jimmy Lwamafa is culpable because he validated the payment and signed off the money, Kiwanuka Kunsa was the vote holder who managed the budget well as Christopher Obey was a technical person who was a signatory to the account,”Anti-Corruption Court Judge  Lawrence Gidudu ruled.