Home » Opinion » Editorial » A little out of the box thinking, will take AfCFTA a long way

A little out of the box thinking, will take AfCFTA a long way 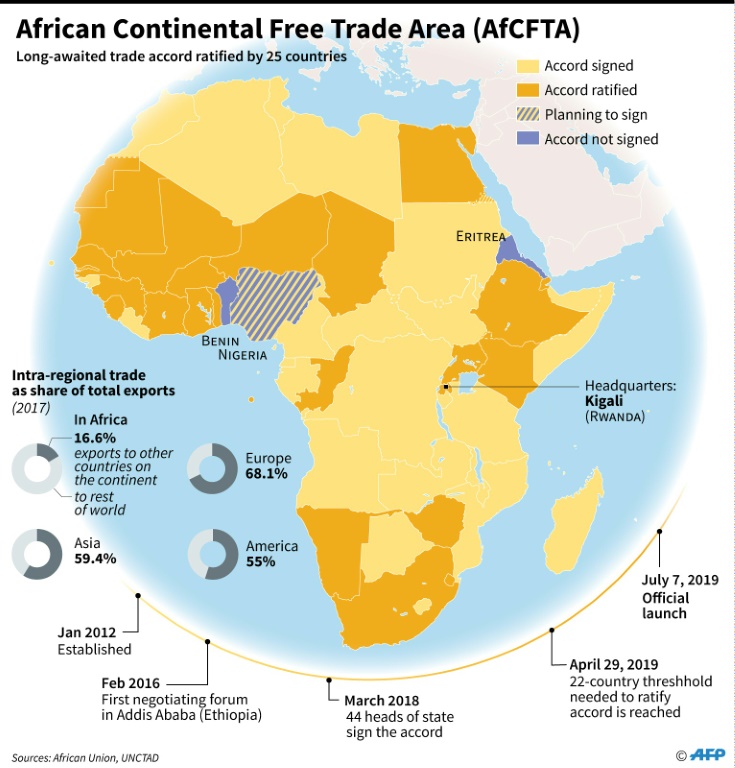 Billed as the world’s largest free trade area, the African Continental Free Trade Area ACFTA, goes live when African leaders meet in the Nigerien capital Niamey on July 7.  After sitting on the fence for a year, Nigeria capitulated early this week, quickly followed by Benin on Friday. That brought the number of endorsements to 54 out of the AU’s 55 member states with Eritrea now the sole holdout.

Yet, despite these late conversions, the initiative is not quite out of the woods unless new thinking and leap of faith take African leaders to a different trajectory.

Covering a potential market of more than of 1.2 billion people and $2.3 trillion in GDP, ACFTA commits signatories to remove 90 percent of the existing tariffs on goods originating from within the trade area. The countries would also be required to phase out the remaining 10 percent over a ten year period.

The removal of tariffs and trade barriers is expected to help Africa leverage its internal strengths to perennial poverty and under development. It is projected that the removal of 90 percent of the tariffs currently imposed on goods and services originating from member countries, could see intra-African trade grow by more than half.

Will it work? With many failed attempts at the regional economic bloc level, skeptics rightly doubt ACFTA will survive the self-doubt and vested interests that have stymied regional economic groupings such as the East African Community. There are also the massive infrastructure and capacity gaps that needs to be addressed before trade can flow smoothly.

Yet with a little futuristic thinking, these obstacles need not turn into the death knell for ACFTA. In a sense, the fears that have made it difficult for states to buy into regional economic cooperation, simplify the job of figuring out what needs to be done. For instance producers and manufacturers in the East African Community have long seen South Africa’s quality standards as a barrier to that market.

Cross-pollination under which ACFTA agrees to common standards and then allows a combination of private sector enterprise and public investment to requisite capacity, would largely address that obstacle. Harmonising trade laws and policy while embracing ICT and linking customs systems should mitigate the likelihood of abuse of rules of origin while opening up air transport under the Single African Air Transport Market SAATM, should provide an immediate bridge as rail and roads – developed with private capital connect key trade corridors. With hindsight, that should be the focus of the ten-year interim period before the zero tariff regime.