April 19–President Yoweri Museveni and wife, Janet, arrived in Doha at the start of a three-day […] 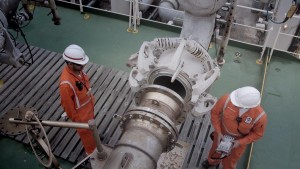 Declining prices on the international market have forced the Qatari authorities to increase the pace of diversification, but the sovereign fund still holds more than $300 billion.

April 19–President Yoweri Museveni and wife, Janet, arrived in Doha at the start of a three-day State visit at the invitation of the Emir of Qatar, Sheikh Tamim bin Hamad Al Thani.

The President’s delegation was met by Mohammed Al Rumaihi, the Minister of Municipalities and Environment at the Sheikh Hamad International Airport.

Talks between the two leaders are expected to centre mainly on energy and the possibilities of Qatar investing in Uganda’s budding oil and gas sector. Qatar’s economy is based on oil and gas which accounts for 50% of GDP, 85% of export earnings and 70% of government revenue. However the government wants to rapidly diversify in the wake of falling prices on the international market during recent years. Qatar’s current foreign reserves stand at $32 billion.

Qatar is the world’s leading exporter of natural gas and is now sitting on a $335 billion sovereign wealth fund managed by the Qatar Investment Authority (QAR). On the other hand, Uganda is in urgent need of money to build a new oil refinery which is already behind schedule.

Doha, where the final game of the 2022 FIFA World Cup will take place, is also headquarters of QNB, the largest financial institution in the Middle East and Africa with assets close to $200 billion. QAR owns half of QNB.

However, attracting Qatari money is not easy. According to the Institut français des relations internationales (Ifri), when comparing Qatari investments in Europe (an  estimated $65 billion by 2013 ) and in North America, with the very limited ones in Africa (probably less than a billion dollars), ‘It can be said  that education and mutual understanding are still to be achieved’.  Expanding the air links across the continent provided by Qatar Airways, is one way the government sees in learning more about sub-Saharan Africa.

But Ifri also concedes in its 2016 report Diplomatic Relations between Qatar and sub-Saharan Africa, energy is one of the main drivers of foreign investments by Qatar although this is also accompanied by some concerns. ‘Africa is still terra incognita for a number of (Qatari) civil servants and there is still deep concern when African embassies try to attract capital to the continent: worry about physical safety, worry about the safety of investments, and a view of poverty and widespread corruption’, the report states.

However Qatar has had long term relations with Sudan and Mauritania, but in recent years has reached out to Ethiopia, Nigeria, South Africa and Kenya.