May 25—Along with the Crested Crane, the Uganda kob features prominently on the country’s national seal […] 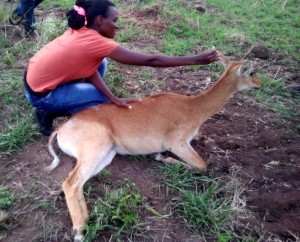 Blood samples were taken from the animals so that future evaluation of their adaptability to the new location is easier.

May 25—Along with the Crested Crane, the Uganda kob features prominently on the country’s national seal and represents abundant wildlife, a vital factor in exploiting tourism earnings. Recently 150 were trans-located from one national park to another to offer these medium size antelopes more range to graze.

Uganda Wildlife Authority (UWA) is moving them from Murchison Falls National Park (MFNP) in the northwest to Kidepo Valley National Park (KVNP) in the northeast.  Dr. Andrew Seguya, the UWA executive director said, “MFNP boasts more than 40,000 kobs. This is overwhelming the carrying capacity of the park.”

To cut costs, UWA shunned the use of aircraft and electric curtains. Instead,  six pick-up trucks with more than 20 men were put to the task. Drama unfolded when some of the Kobs managed to twist and turn in a bid to escape, but  a team of rangers with rugby player physiques were ready to catch them.

On arrival in KVNP the animals popped out of their cages like bullets before splitting up into groups of five and six. Within no time, the males were seen and heard marking out territory. They do this by whistling. 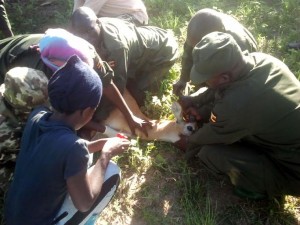 Trapped kob having its blood samples taken before being translocated to Kidepo Valley National Park.

Dr.  Margaret Driciru said each of the animals had a blood sample taken. “We have to monitor their adaption to the new home.  It is just a routine procedure. In case they get adoption challenges we know what to do,” she said.

The Uganda kob is not protected, but there is always the risk of human activities encroaching on its range. Kobs have an average lifespan of 17 years.

Uganda has 10 national parks. Managed by UWA, the parks offer ‘traditional’ savanna safaris along with boat tours, forest hikes, mountain climbing and wildlife research activities.  Experts say Uganda is unrivaled on the continent as a bird watching destination with over 1,000 species of birds – several of which are found nowhere else on the planet. It is also home to 13 types of primates including over half of the world’s endangered mountain gorillas; and our closest relative – the chimpanzee.