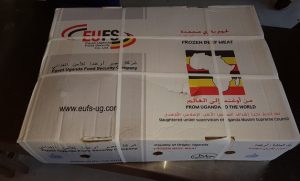 The online publication Egypt Today quotes Kallini as saying that Ugandan meat was of higher quality than the Brazilian meat that Egypt has been relying on.

The shipment is the culmination of three memoranda of understanding that President Museveni signed with his Egyptian counterpart President Abdel Fatah al-Sisi during a visit to Cairo in May.

The presidents witnessed the signing of three MoUs in the fields of electricity, agriculture development and industrial zones. Museveni then said that both leaders were keen to support the establishment of mutual projects aimed at realizing food security for both peoples.

Museveni’s two-day visit in May was at the invitation of President Sisi during which they discussed ways to enhance bilateral relations, as part of Egypt’s efforts to broaden cooperation with sub-Saharan countries in different fields.

In remarks to the press Minister of Foreign Affairs Sameh Shoukry said that the Egyptian private sector was willing to scale up its investments in Uganda.

He referred to an Egyptian company that is conducting a feasibility study to establish projects worth an estimated at $300 million, in the fields of electricity and energy.

In 1996, Egypt which as at the time importing food items worth $3 billion annually, offered to import atleast half a billion dollars worth of its food needs from sub-Saharan Africa but there has been little progress since then.