Uganda caught up in UN shortage 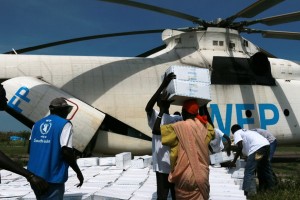 Unloading relief aid in South Sudan where the government has  already declared famine in some parts of the country.

February 22–The United Nations refugee agency, UNHCR and the World Food Programme (WFP), are desperately fundraising for cash and relief aid as 10 refugee operations in Africa, including some in Uganda, have experienced cuts affecting the quantity and quality of food assistance for approximately two million refugees.

Besides Uganda, food rations have been dramatically cut – in some cases by up to 50% – in large operations including Cameroon, Chad, Kenya, Mauritania and South Sudan. The South Sudan government has already declared famine in several parts of the country and Uganda harbours nearly 300,000 refugees from South Sudan as a result of a sporadic civil war.

“We can’t imagine how difficult life is for thousands of refugee families with no food, and often denied the possibility to work or provide for themselves in other ways. Refugees are extraordinarily resilient, but cuts in food assistance – sometimes as high as 50% – are having a devastating impact on the health and nutrition of thousands of families,” Filippo Grandi, the UN High Commissioner for Refugees said.

He said,  “The right to food is a basic human right. We are working with WFP to ensure that no refugee goes to sleep hungry, but support has to come quickly.”

In a joint statement, Grandi and Ertharin Cousin, the WFP Executive Director, said the number of refugees in Africa nearly doubled from 2.6 million in 2011 to nearly 5 million in 2016. While donor funding for refugee assistance increased during this period, it did not keep pace with rapidly rising needs. As a result, the humanitarian response is significantly underfunded. This has forced cuts in food assistance for some groups of refugees.

The two agency heads warn that food shortages will have dire consequences on the health and protection of such vulnerable people, unless more support is urgently made available.