Mevlüt Çavuşoğlu :Turkish Democracy was protected by the ordinary citizen

At around 10pm on Friday, July 15, members of a sleeper cell belonging to a fringe […] 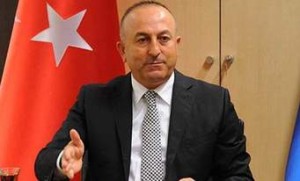 At around 10pm on Friday, July 15, members of a sleeper cell belonging to a fringe terror cult tried to stage a coup in Turkey, attempting to depose the democratically elected government.

This coup was staged by a clique inside the Turkish Armed Forces linked with the Fethullah Gulen Terrorist Organisation. The rogue officers went on to fire at police stations with fighter jets, killing dozens of police officers tasked with protecting the people. The F16s hijacked by members of the terror cult dropped bombs on the Turkish parliament while the legislature was still in session. The chairman of the Joint Chiefs of Staff Hulusi Akar and several other high-ranking generals were kidnapped by their own personal security details. Attacks on all facets of democratic institutions took place nearly simultaneously.

At this point, something miraculous and unprecedented happened. The citizens of Turkey responded, realising that their democracy was in danger. As news of the coup spread via social media, the people stopped what they were doing and took to the streets.

By the time President Recep Tayyip Erdogan returned to Istanbul’s Ataturk airport, hundreds of thousands of ordinary citizens had poured out into the streets, confronting soldiers armed with heavy artillery, tanks and assault rifles.

Ordered to put down any resistance, participants in the coup fired from helicopters on crowds of civilians. As waves of civilians were cut down in the streets, many more were infuriated by videos of the blatant disregard for the lives of their countrymen. Social media accelerated the spread of news, and within hours millions of Turks filled the city centres demanding that soldiers return to their barracks.

Five hours into the attempted coup, tanks that had been sent into the streets to intimidate the people were surrounded by masses of Turks furious at the attempt to interfere with democratic order. Soldiers who had fired on innocent civilians put down their arms and surrendered. The coup had failed. Democracy was protected by ordinary citizens who had gathered to oppose the coup.

All political parties in the Turkish parliament were united in their condemnation for the failed coup by issuing a joint declaration. Once again, Turkish democracy had proved its credentials. The key role of the Turkish media in opposing the coup attempt is striking. Tragically, 246 Turkish citizens lost their lives during this violent terror campaign – of those, 179 innocent civilians who just stood bravely in front of the tanks and reclaimed their democratic rights.

More than 2,000 Turkish citizens were wounded. Those taking place in the coup attempt will be prosecuted and tried in accordance with the law.

The statements of those under arrest and the information from multiple agencies prove that this terrorist coup attempt was staged by the Fethullah Gulen Terrorist Organisation. For more than 30 years Fethullah Gulen has encouraged his followers to infiltrate the military and judiciary in Turkey.

Hidden camera footage from 1997 reveals Gulen telling his followers to “avoid detection and infiltrate” all levels of the state down to its “capillaries”. Cloaking this sinister and heinous agenda, Gulen has formed a broad network of schools, NGOs and businesses, and covertly infiltrated into public offices to overthrow the democratically elected government in Turkey.

Gulen, who has already been sought by Turkish officials to stand trial on several counts of conspiracy, resides in southern Pennsylvania, USA. The US has not yet extradited him to Turkey to stand trial, and continues to renew his residency permit. The Turkish people are appalled at the US’ insistence in harbouring him. We, as the Turkish government demand his return to face justice.

His extradition to Turkey is the strongest expectation of the people of Turkey from the US. The position of the US on this vital matter is what may shape the future relations of the two key allies.

The Fethullah Gulen Terrorist Organisation continues to obtain financing for its subversive activities through operating charter schools in the US. Gulen’s activities have jeopardised the stability and constitutional order of NATO ally Turkey. Any support rendered to Gulen and his terrorist organisation does not comply with the spirit of cooperation between Turkey and the US.

We expect the US authorities to show solidarity with its NATO ally Turkey and take immediate action in restricting the activities of Gulen as well as his network, and extradite him to Turkey.

His Excellency Mevlüt Çavuşoğlu, is Turkeys’s Minister for Foreign Affairs