September 19, 2018—A heated row is developing in Liberia between President George Weah’s administration and that […]

September 19, 2018—A heated row is developing in Liberia between President George Weah’s administration and that of his predecessor, led by Ellen Johnson-Sirleaf, over a missing consignment of currency notes. 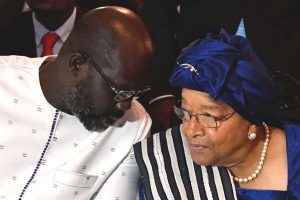 Weah and Johnson-Sirleaf in more cordial days before the missing money burst into the public domain.

The government has named 15 people for investigation in connection with ‘missing’ containers and bags of money amounting to 16 billion Liberian dollars (equivalent to nearly $100 million).

On Tuesday, Information Minister Lenn Eugene Nagbe in a VOA Daybreak Africa interview reiterated that the current administration had nothing to do with the controversial missing money controversy.

He said the ongoing investigation has determined that in November of 2017 a batch of banknotes came in the country – just before the president assume office. “Now, when the President received information about these newly-minted banknotes, he sanctioned an investigation which is being chaired by the Ministry of Justice and the Financial Intelligence Unit (FIU) and other security apparatus. The idea is to understand how much money came into the country, how much was ordered, how much was printed, which country it was printed in and how did it affect the foreign exchange situation in the country.”

Former president Johnson-Srlaf said in a statement, “I have been reliably informed that the Central Bank if Liberia (CBL) has undertaken an internal investigation and in directive from the Minister Justice provided a full report to the police. The CBL has prepared a release that gives full evidence and clarification that refutes the statement of Minister Nagbe. This had been held for two days because the CBL Governor and the Minister of Justice have refused to approve the release.  It is most unfortunate that the GOL would give false information that wickedly impugns the reputation of past officials and by extension the country itself.”

Nagbe said the money was brought through the Freeport of Liberia and the Roberts International Airport. “An estimated of a little over 15 billion Liberian dollars as far as we have concerned from ongoing investigation as of today and it came in the two ports of entry.”

According to documents FrontPageAfrica has acquired, Ms. Grigsby-Toe, Assistant Director/General Support Section at the Central Bank of Liberia, wrote the management of the National Port Authority on February 2, 2018 notifying the port that the bank was taking delivery of the money.

The memo noted: ‘Kindly allow our brokers Mr. Lawrence Sirleaf and Ms. Elise G.N. Jolo of JV’s Enterprises Inc. along with the Banking Staffs of the Central Bank of Liberia and the Liberia National Police (ERU) to take delivery of two (2)x20 ft containers of the Printed Material from the Freeport of Monrovia on February 5, 2018’.

Another communication from Mariea Gribsy-Toe, Assistant Director, General Support Section of the CBL on March 31, 2018 wrote the NPA requesting the management of the NPA sought permission the brokers in persons of Lawrence Sirleaf and Miss Elise G. N. Jolo of JVS Enterprise Inc. along with the banking staff of the CBL and ERU officers to take delivery of one 20ft container of printed materials from the Freeport of Monrovia on March 31, 2018.

FrontPageAfrica also has in its possession, an application for special permit for the container which shows a shipment of banknotes from Sweden. That batch was transported by the Safmarine which arrived or was expected to arrive on November 22, 2017, suggesting that the container was docked in the port but not unloaded until February when the new administration took office.

The document was processed on December 13, 2017 and the  20ft container, according to the document had a total of 8,000 printed materials containing Liberia Ten Dollar banknotes – with a valued total 506,898.00(five hundred, eight hundred and ninety thousand).

Another document, a verification slip from the office of the Commissioner of Custom at the Ministry of
Finance and Economic Planning showed that the ministry give a 100 percent approval to the shipment. Samuel D. Tweah, who serves as minister was one of the first appointees of President Weah in January, a couple of days after the president’s inauguration.

In the wake of the controversy, the current administration appear to be shifting blame on its predecessor with minister Nagbe noting Tuesday that heads will roll when the investigation is completed. “I can assure you that at some point during this investigation, we will call people in, people will be arrested and indicted,” he said.

On Tuesday, the Ministry of Information issued a circular advising what it described as ‘Persons of Interest’ who are required to assist with the ongoing investigation into circumstances surrounding the importation of the Liberian dollar banknotes between November 2017 and August 2018, contradicting Ministers’ earlier assertions that the container was processed under the previous administration of former President Ellen Johnson-Sirleaf.

Late Tuesday, a former banker who preferred anonymity said that if the head of the government is not complicit into the huge scandal involving the missing money container, it can easily track the missing container; because, according to him the process of importing money is simple.

The banker said: “When the money arrived, it doesn’t leave the plane or the ship until the comptroller or the Head of treasury put together a small team; the head of the team is given the code. The head of the team will then present the code to the captain of the ship or the pilot before the money is released to him. When the money is released to him as head of the team, the money is taken directly to the bank. The only people who could give instructions to divert the money is either the President or the Comptroller.  And so, in the instant case, the so-called investigation or question should be directed to the team or the Comptroller or the Head of Treasury as to who instructed them to divert the money from going directly to the Central Bank? And where was it taken?”