September 21, 2018—Stanbic Bank has been named among the top tax payers in the country by […] 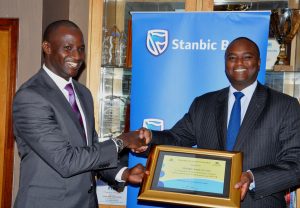 Mukiibi hands over a plaque to Mwehiere in appreciation of Stanbic’s exceptional compliance and returns of $26 million for financial year 2017/18.

September 21, 2018—Stanbic Bank has been named among the top tax payers in the country by the Uganda Revenue Authority and handed a plaque to mark this achievement.

Patrick Mukiibi, the acting URA Commissioner General said at the presentation in mid-week, “This month, we are having the Tax Appreciation Week as a way of thanking all tax payers in the country and recognize those who have been faithful with payments. Stanbic Bank has proved its commitment to the growth of this country not only by being compliant but also by helping us in collections.

He said, “In 2017 alone, Stanbic collected UGX3.8 trillion (nearly a million dollars) in taxes on behalf of URA. This represents approximately 30 pc of our total revenue collections. We encourage all the other players in this economy to emulate Stanbic by coming forth, declaring and paying their taxes as we develop Uganda together.”

Tax Appreciation Week is set for September 26th to 28th that aims at recognizing  people and institutions pay their dues on time.

Stanbic is currently the highest tax payer in the banking sector and fourth highest overall having paid up to UGX100 billion ($26 million) for financial year 2017/18.

While accepting the award, Stanbic Bank’s Chief Executive Patrick Mweheire said, “As a bank, we believe in playing our role in building a better tomorrow for the growth and development of Uganda’s economy. Paying taxes is a huge part of that agenda and we are glad to be among the top five highest tax payers.”

He said, “As one of the top five tax payers in Uganda, Stanbic Bank Uganda is proud to be in partnership with Uganda Revenue Authority in the 2018.”

Stanbic is also playing a key role in supporting the growth of various key sectors but most especially with a key focus on small and medium enterprises (SMEs) who contribute greatly to the growth of the economy. The bank recently introduced a SME Business Incubator that aims to help businesses upscale and gain better operational skills. The facility provides these businesses access to industry and sector specialists, regulators, subject matter experts who can advise them on key requirements including how to pay taxes and other business advisory.