KIGALI, APRIL 23 – The Rwanda Defence Forces have been deployed to contain an invasion of […] 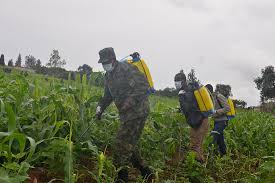 KIGALI, APRIL 23 – The Rwanda Defence Forces have been deployed to contain an invasion of armyworms that have ravaged the maize crop across a swathe of Southern and Eastern Africa.

East Africa has been on high alert for the pest since an outbreak was reported in Southern Africa late last year.

Soldiers, armed with knapsack sprayers and 4.5 tonnes of Pyrethrum EWC+ pesticide produced by Sopyrwa, a company affiliated with the Ministry of Defence, spread out across the country as the pest that has so far attacked 16 percent of the 63,000ha under maize. Other cereals such as sorghum have not been spared and there are fears it could spread to rice and sugarcane as well.

The pest has now spread to all of Rwanda’s 30 districts while similar outbreaks have been reported in Kenya and Uganda.

The government has mobilised a massive spraying exercise combining the efforts of workers from the Ministry of Agriculture, the Rwanda Defence Forces and the police to check the pest’s spread.