Russia plans to build hotel on the International Space Station

January 18- Tourism is blooming across the planet. In fact, the demand to visit new places […] 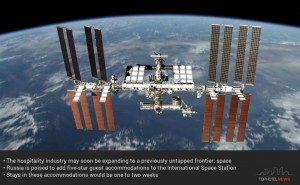 January 18- Tourism is blooming across the planet. In fact, the demand to visit new places has risen so high, that the hospitality industry may soon be expanding to a previously untapped frontier: space.

Russia’s space agency is poised to add some new luxury as it returns to the space tourism business by adding a five-star guest accommodations to the International Space Station. If this plan is successful, it would also help the Russian government compete with the likes of private companies such as SpaceX, Virgin Galactic, and Blue Origin, which all have dynamic space tourism plans of their own that are currently underway.

Recently, a report came to light of a detailed proposal for a luxury orbital addition to the International Space Station, one that might be familiar to consumers who frequent luxury travel, providing a list of amenities that includes private cabins with large windows for space viewing, exercise facilities with equipment, and Wi-Fi, which these days is a must for any hotel that wants to attracts guests. In addition, guests would be offered the chance to complete a space walk with a professional cosmonaut on the station. Stays in these accommodations would be one to two weeks.

Roscosmos State Corporation is actually the Russian governmental entity that is responsible for Russia’s space science program, and it has already started to review the business plan that has been proposed by the space station contractor, RSC Energia.

This will, however, be quite a bit more expensive than typical tourism and on-planet hospitality experiences, with a price tag for the trips that will start at $40 million. The space walk and an option to stay for an entire month would add another $20 million to the cost of the trip, as building a luxury orbital suite is a complex and expensive undertaking for the contractor.

The idea, however, would be to then use revenue from the space tourists to pay for the costs of constructing a 20-ton, 15.5 meter long module that will house four sleeping quarters as well as two “hygiene and medical” stations. This isn’t, however, an entirely new idea, as Russia first began exploring the idea of a luxury space hotel as far back as 2010, when a Russian aerospace company at that time said it had plans that would lead to the construction of such a property by the year 2016. Obviously, this has not come to pass.