KAMPALA, DECEMBER 8 – Less than a week after cancelling a much publicized promotional concert in […] 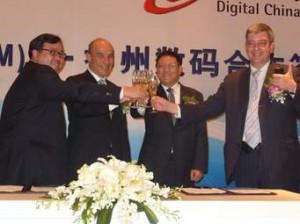 KAMPALA, DECEMBER 8 – Less than a week after cancelling a much publicized promotional concert in Kampala, by Nigerian musical superstar Whizz Kid leaving thousands of fans in limbo, Chinese digital television operator Star Times Television finds itself courting controversy once again after the Nigerian House of representatives launched an investigation into a joint venture agreement between the Nigerian National Television Company and Star times.

Signed in 2009, the partnership was meant to increase content, build a terrestrial wireless digital television system and operate a pay television service. In return the Chinese digital broadcaster was given effective control of the entire NTA infrastructure and a 70percent holding in the JVC with the Nigerian broadcaster getting 30percent.

The house motion tabled on December 1, in bill no 72 in the second session of the 8th national assembly sponsored by Hon Yusuf Ayo and Hon Chris Emeka Azubogu reads; “The house notes, with concern the NTA which has provided the entire infrastructure for the joint venture in addition to accepting the responsibility of assisting SCNTL to implement almost all the responsibility in the agreement was allotted only 30percent of the shares while SCNTL despite its scant contribution was allotted 70percent of the shares. The house is also concerned that, the JV agreement is grossly lopsided against the NTA which also seeded the intellectual property of the JV to Star Times thus endearing a master servant relationship between the NTA and Star times”.

It concludes by mandating the committee on information orientation, ethics and values to investigate the JVA between the Nigerian Television Authority and Star Communications Network technology co Ltd to ascertain whether the interests of Nigeria was well represented and is being protected and report back to the house within six weeks for further legislative action.

Reports across the continent indicate Star the company has a very chequered operating history having been sued by consumers for selling obsolete DVB T1 decoders in Uganda, their broadcasting license revoked in the DRC for copyright infringements and a tender cancelled in Zambia in 2013 due to allegations of corruption. It is therefore unclear why either Government would chose to go ahead with any deal with the controversial company.

Controversy however is nothing new to Star Times noted Charles Onyango an East African television analyst “sadly African Governments appear to have very short memories otherwise they should have been kicked off the continent years ago”.