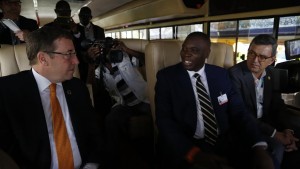 “In this 21st century people have been wondering where this technology will come from. And to be here and we have this bus, with green mobility technology is quite inspiring,” Steiner said.

This was after Steiner together with other senior UN officials had completed a test ride in the Kayoola Solar bus – Africa’s first electric traction bus that is also powered by solar energy.

Kiira Motors Corporation is participating in the sixth edition of the Sustainable Innovation Expo as the Green Mobility Technology Exhibitor. The event is running on the sidelines of the United Nations Environmental Assembly in the Kenyan capital Nairobi.

KMC was invited to be the Green Mobility Exhibitor by Climate Action, the organizers of the Expo, in recognition of the nascent automotive integrator’s pioneering role in the development of relevant and zero emissions mobility solutions for Africa and by Africans.

Professor Sandy Stevens Tickodri-Togboa, Minister of State for Higher Education, Science and Technology, who is also attending the assembly, invited private investment to boost the green mobility technological innovations that are being championed by Kiira Motors.

“The automotive industry with these new tested technologies is the right sector for private investments. The monetary rewards will be enormous for private investors who will invest in this 21st mobility technology,” professor Tickodri said.

Mr. Paul Isaac Musasizi , the CEO at Kiira Motors said that Uganda was ready and committed to champion clean energy technology in the automotive industry. “We at Kiira Motors are fired up to ensure that vehicles made in Uganda are a reality, without compromising the safety of users or the right of future generations to a clean planet,” he stressed.

Close to 1000 delegates are attending the second United Nations Environment Assembly (UNEA-2),  which aims to tackle some of the most critical issues facing our planet, from the air pollution that kills millions of people every year to an illegal trade in wildlife that is pushing species to the brink of extinction.

Held at the headquarters of the UN Environment Programme (UNEP) in Nairobi, UNEA is the world’s most powerful decision-making body on the environment. This year, leaders hope to pass a raft of resolutions, including those on food waste, the fading health of oceans, the world’s natural capital, and sustainable consumption and production.

Addressing the opening session, UNEP Executive Director Achim Steiner noted that since the first UNEA held in 2014, “the environment has shifted from the margins of attention to the centre of global decision making.”

“It now runs through the entire 2030 Agenda for Sustainable Development and the Paris Agreement on climate change, establishing UNEA as the ‘World Parliament for the Environment,” he said, stressing that UNEA is the only platform outside of the UN General Assembly to have universal representation.

UNEA also works with stakeholders and experts from the financial, legislative and scientific communities, non-governmental organizations (NGOs) and the private sector and provides an interface between science, policy and action.

Mr. Steiner urged participants to focus on action and use this first global decision-making platform since the 2030 Agenda and Paris Agreement to review and accelerate progress.

He said UNEA-2, which continues through 27 May, will feature a three-day Sustainable Innovation Symposium to garner private sector engagement, the launch of a new global campaign to end the illegal trade in wildlife, and the mid-term review of the Montevideo Programme on Environmental Law.

He urged UNEA to show “we can move fast enough and hard enough to create a healthy planet, with healthy people – which leaves no one behind – which means less talk, more action.”

A series of ground-breaking UNEP reports will also be released during UNEA-2. Published today, Healthy Environment, Healthy People warns that environmental impacts are responsible for the deaths of more than one quarter of all children under the age of five, the report states.

The report – compiled by UNEP, the World Health Organization (WHO), the Convention on Biological Diversity (CBD), the Montreal Protocol on substances that deplete the ozone layer, and the Basel, Rotterdam and Stockholm conventions – estimates that environmental degradation and pollution cause up to 234 times as many premature deaths as occur in conflicts annually, highlighting the importance of a healthy environment to achieving the 2030 Agenda.

The report finds that in 2012, an estimated 12.6 million deaths were attributable to deteriorating environment conditions, or 23 percent of the total.

Climate change is exacerbating the scale and intensity of environment-related health risks. Estimates from the WHO indicate that 250,000 additional deaths could occur each year between 2030 and 2050, mostly from malnutrition, malaria, diarrhea and heat stress, as a result of climate change.

Mr. Steiner said, “By depleting the ecological infrastructure of our planet and increasing our pollution footprint, we incur an ever-growing cost in terms of human health and well-being. From air pollution and chemical exposure to the mining of our natural resource base, we have compromised our life support systems.

Other reports include Marine Plastic Debris and Microplastics: Global Lessons and Research to Inspire Action and Guide Policy Change, which found that 4.8-12.7 million tonnes of global plastic production in 2014 ended up in the ocean as a result of inadequate solid waste management.

Gender and Plastic Management looked at the differing roles of men and women in plastic use and consumption, identifying women in wealthy regions as important stakeholders in reducing plastics in basic consumer goods.

The 2016 Global Report on the Status of Legal Limits on Lead in Paint found that efforts to tackle lead in paint are advancing. As of early 2016, 70 of 196 countries worldwide, or 36 per cent, had established legally binding limits on lead in paint.

UNEP Frontiers found that there has been a worldwide increase in emerging zoonotic diseases, outbreaks of epidemic zoonoses, a rise in food-borne zoonoses and a troubling persistence of neglected zoonotic diseases in poor countries