Heikal puts a foot forward for investment in emerging markets

KAMPALA, JANUARY 22- The Middle East and Africa region is still a good business proposition and […] 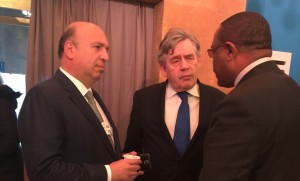 KAMPALA, JANUARY 22- The Middle East and Africa region is still a good business proposition and investors need to cultivate just a little appetite for risk, argues Ahmed Heikal, Chairman and Founder of Qalaa Holdings. Speaking during a CEO panel discussion on the opening day of the World Economic Forum in Davos Switzerland, Heikal said the current environment of low commodity prices, high debt levels in emerging markets, higher interest rates in the US, sluggish emerging-market economies and slower Chinese growth had led investors to the mistaken conclusion that it was not viable to invest in the Middle East and Africa region for the time being.

The CEO panel was discussing the investment case for the Red Sea region, the barriers to investment and the measures needed to get capital flowing into the region amid geopolitical uncertainty and a collapse in energy prices. The session opened with a commentary from Prince Turki bin Faisal Al Saud, a senior member of the Saudi royal family and former Saudi Ambassador to the U.S, followed by a panel composed of Heikal, GE Power CEO, Steve Bolze and British businessman and CEO of Wire and Plastic Products plc, Sir Martin Sorrell.

“If you’re an infrastructure investor and have appetite for risk, then there are opportunities and very significant growth potential in regional markets,” argued Heikal adding; “Governments across the region are now entering into a new paradigm, they have come to the realization that they can no longer do it alone, they must partner with or enable the private sector to take on the large megaprojects that were previously only in the realm of the public sector.”

Heikal said Qalaa was 3 to4 steps ahead of this trend because they saw these opportunities’ early thus the reason for their investment in companies like TAQA Arabia, the largest private sector energy distributor in Egypt. And as a result of the deregulation of the Egyptian energy sector, the firm was now looking at new growth opportunities.

“Our long term view was questioned in the beginning but now our strategy has been validated. Governments are now starting to focus on fighting their own battles, dismantling the bureaucracy, playing the role of regulator and letting the private sector do its job. Governments cannot continue to shoulder these funding needs, or else emerging markets will wake up to a large credit crisis in five years” said Heikal.

Responding to the issue of lack of transparency in the region, Heikal observed that progress was being made towards more open procurement thanks to the role of lenders.

“The Development Finance Institutions (DFI’s), Export Credit Agencies (ECA’s) and Sovereign Wealth Funds (SWF’s) that are now funding projects in the region are requiring companies to abide by stricter codes of conduct.

“You can look at the cup as half empty or half full. Of course there are global headwinds but if you take the optimistic view and look at the cup half full you will recognize that there has been substantial reform across the region particularly in Egypt and the Kingdom of Saudi Arabia but the results of this effort will not be felt for another five years,” Heikal said.

But investors will also need to take a proactive approach to bridging the regions deficit in education and human capital development. Heikal said “the divide between rich and poor continues to widen globally and it is particularly pronounced in our part of the world which is why it is incumbent upon investors to bring in and train the best talent they can find.”

Capitalists also need to look across the investment spectrum and open the door for smaller projects as well as large infrastructure investments because SME’s and microenterprises will be important for economic growth in the region,” said Heikal.

Pointing to the $3.7 invested in the Egyptian Refining Company (ERC), Heikal said Qalaa, now a leading player in the African energy and infrastructure sectors, has been able to tap into a wide pool of funding resources under highly challenging conditions to fund large-scale infrastructure projects that are critical to Africa’s development. A Greenfield investment, the ERC is Egypt’s largest in progress, private sector infrastructure megaproject. Now more than three- quarters complete the ERC has the potential to more than halve Egypt’s present-day diesel imports and reduce the country’s current sulfur emissions by nearly one-third when it starts production in 2017.