With 60 – 70% of urban African households living in slums, Report calls for new approach […]

With 60 – 70% of urban African households living in slums, Report calls for new approach to housing, lending and land policies 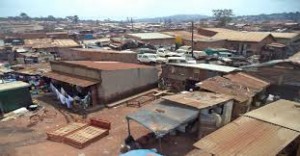 JOHANNESBURG, December 1, 2015 –Africa faces a major housing crisis due to rapid urbanization and a growing slum population. New, targeted approaches to affordable housing are necessary if countries want to take advantage of the demographic shift to make cities inclusive, spur economic growth and expand job opportunities, according to a new report by the World Bank Group.

The report, Stocktaking of the Housing Sector in Sub-Saharan Africa, projects that Africa could have as many as 1.2 billion urban dwellers by 2050 and 4.5 million new residents in informal settlements each year, most of whom cannot afford basic formal housing or access mortgage loans.

“Adequate quality housing is critically important for economic growth and social inclusion,” said Mamta Murthi, the World Bank Group’s Acting Vice President for Africa. “Governments will need to join hands with the private sector to facilitate investments in housing by expanding access to and improving the quality of existing stock, while at the same time making it easier for people to access land and housing finance.”

The reportlooks at trends across the region and identifies opportunitiesin rapidly growing cities. The recognition of informal housing as the only option available to a large majority of Africans signals a need for new approaches to housing policy.

“In many African countries, only the upper 5 to 10 percent of the population can afford the cheapest form of formal housing,” said Ede Jorge Ijjasz Vasquez, Senior Director for the World Bank Group’s Social, Urban, Rural and Resilience Global Practice. “As a result, 90 percent of Africans live in informal housing, where living conditions are often substandard, unsafe and without basic services like water, electricity and sanitation. This report demonstrates that targeted interventions in the informal market can bring rapid improvements in the quality of existing housing stock in a number of African countries.”

While many governments in Africa have been directly providing housing to meet the demands of growing urban populations, these programs are extremely costly to government, out of reach for the urban poor, and have not significantly increased the amount of affordable housing.

The reports recommends thatscarce government resources should instead targetinformal housing in low-income areas and households — upgrading infrastructure, improving land administration and planning regulations, and expanding access to finance through microfinance loans, credit groups and credit cooperatives. Only 5 percent of adults in Sub-Saharan obtained a loan from a formal financial institution last year, half the rate of other developing regions such as South Asia or East Asia and the Pacific.

“Apart from the immediate and obvious benefits of adequate housing, a well-functioning housing sector leads to economic growth that can improve livelihoods, create jobs and expand the market for goods and services,” says Jonas Parby, World Bank Urban Specialist and one of the authors of the report.

Housing construction and ownership not only benefit families, but also create jobs for masons, carpenters, electricians and other trades. For every house built, five jobs are created. While investment in formal housing in Africa is low compared to every other region, a more strategic approach to the housing sector will encourage private investment.

The report also notes that while slum populations in other regions are declining, Africa’s is growing. If current trends continue, the majority of people living in slums will be in African cities, making the need for adequate, affordable housing more urgent than ever before.