Home » Business » Companies » Fasjet on the edge as crisis deepens

Fasjet on the edge as crisis deepens 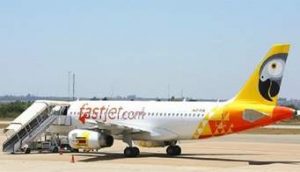 September 27 -African budget carrier Fastjet is warning that it needs more funding by the end of next month or it will face the prospect of ceasing operations.

Fastjet says it is discussing a potential equity funding effort with its major shareholders.

It warns in its half-year financial disclosure that, without further funding, it will not be able to continue trading as a going concern.

“While initial discussions with certain shareholders have been positive, discussions are ongoing and there can be no guarantee of a successful outcome,” it says.

Fastjet has simultaneously warned that its Tanzanian operation could face closure as a result of the financial impact of competition in the region. The Tanzanian arm is suffering “continued losses”, it says.

“Recent changes in the competitive landscape in Tanzania have caused the board to evaluate Fastjet’s Tanzanian operations,” says the company, adding that the consequences “could include ceasing operations” in the country.

Revenues surged by 42% to more than $30 million, faster than the 36% increase in the cost of sales – but the cost figure still outstripped income.

Fastjet also highlights the vulnerability of its Zimbabwean and Mozambican operations, stating that the “headroom” of freely-usable and available cash is “minimal” and that the company’s ability to continue as a going concern remains “very sensitive” to future funding requirements.

But it points out that both markets are showing strong growth or good potential.

The company says it has been experiencing regulatory delays which have caused problems with deploying its ATR 72-600 turboprops in Tanzania, exacerbating the drag of a slowing economy.

“There remains no clear indication of when these hurdles may be overcome, prompting the board to reconsider Fastjet’s entire operations in Tanzania into the future,” it adds.

The ATRs will be deployed either in alternate markets, such as Mozambique, or sub-leased.

Chief executive Nico Bezuidenhout says Fastjet’s performance has been hampered by other issues, such as interest payments on legacy debt and the start-up costs for its Mozambican arm, which amounted to more than $2.6 million.