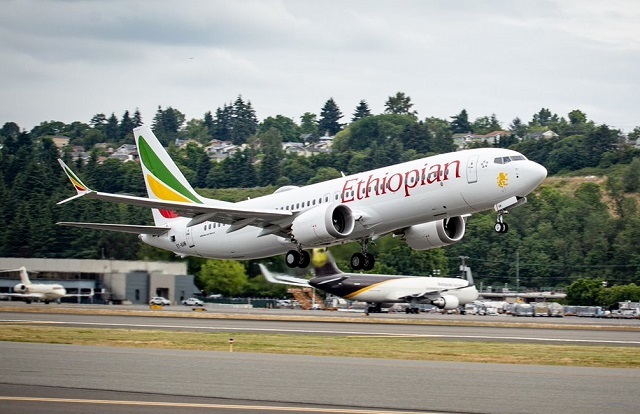 The loss of an airliner with 157 lives has once again triggered questions about air safety. […]

The loss of an airliner with 157 lives has once again triggered questions about air safety. Coming after the loss of a similar type of aircraft in almost identical circumstances in Indonesia last October, Boeing is the crosshairs of both public and expert opinion about the safety of its 737-800 Max.

Until information is extracted from the flight data and cockpit voice recorders however, it would be premature to arrive at any conclusions about what could have brought ET302 down just six minutes into its last flight.

According to preliminary information, the aircraft had landed in Addis three hours earlier on a flight from Johannesburg. Ethiopian has not said if the crew that piloted the aircraft before the accident flight reported any problems. Ethiopian also says the Captain, a veteran with 8000 hours under the belt had requested for a return to Addis but has not shared any details about the nature of the emergency he was dealing with.

Whatever the case, loss of an aircraft under full power – as the crash scene suggests- points to problems with the crews ability to control the aircraft. The scene also rules out an inflight breakup since the wreckage is fairly localised. The impact crater also suggests that the plane came down whole while the fragmentation of the wreckage is evidence of a pressurised vessel and high energy at impact.

Ethiopia and China have taken the precautionary measure of grounding their fleets piling yet more pressure on Boeing to reassure the travelling public about the safety of its flagship aircraft programme. While maintenance issues were highlighted in the Lion Air 737 Max crash, it will be more difficult to make these stick in Ethiopian’s case given the carriers safety record and technical capabilities. Ethiopian is a licensed Boeing repair shop with the capacity to conduct overhaul work.

If it turns out that the two crashes are related to a bug within the aircraft’s architecture, it does not necessarily spell doom for the Max. In its early days, the original 737-100 also suffered a number of mysterious crashes before the problem was traced to early fatigue in the rudder control system. The 737 has gone on to sell thousands of units and is easily the most recognisable aircraft in the world today. The model will survive this crisis.

On another track, an African airline losing an aircraft on African soil, is bound to revive the debate about air safety in Africa. Until ET 302, the great leaps in African air safety was one of the best kept secrets from the world. For the past three consecutive years, Africa has not suffered a single fatal jet aircraft accident.

According to IATA safety figures, 523 people died in 11 fatal accidents involving mainline jet aircraft in the world. None of those accidents involved an African airline. The previous year, 2017 registered 19 fatalities in six accidents. Like 2016 before it, Africa emerged unscathed with zero fatalities.

Increased safety consciousness and younger fleets have placed Africa on a new trajectory. Thanks to initiatives such as IATA’s Operational Safety Audit IOSA, the continent is seeing increased compliance with global aviation standards. Regulators are also more empowered to make independent decisions while competition and the European Union’s decision to ban dangerous aircraft from its airspace have forced airlines to invest in new equipment.

By 2018 some 37 African airlines has signed up to IOSA and increasingly, even non-IATA member airlines are signing up to the programme.

According to IATA, in 2018, the all accident rate for airlines on the IOSA registry was more than two times lower than that of non-IOSA airlines (0.98 vs. 2.16) and it was more than two-and-a-half times better over the 2014-18 period. All IATA member airlines are required to maintain their IOSA registration. There are currently 431 airlines on the IOSA Registry of which 131 are non-IATA Members. The IOSA program is undergoing a digital transformation that will enable IOSA airlines to compare and benchmark their performance. In the long run, the digital transformation will help to focus auditing on areas with the highest level of safety risk.

IOSA registered airlines are now expected to track, monitor and record all safety incidents as they occur and how they are rectified. Airlines are expected to maintain a continuous record of safety events throughout their operations. This helps them to embed safety in the internal organisational culture rather than make safety the responsibility of a specific unit of the company.

Ethiopian, Kenya Airways and Rwandair are among airlines in the East Africa region that are IOSA certified.