Home » Business » Companies » Emirates celebrates a decade of A380 operations

Emirates celebrates a decade of A380 operations

August 7, 2018 – All wide-body aircraft operator Emirates, is this month celebrating a decade since […] 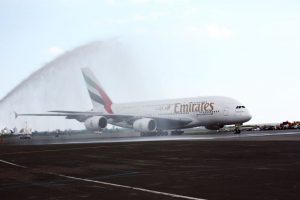 August 7, 2018 – All wide-body aircraft operator Emirates, is this month celebrating a decade since it introduced the world’s largest passenger aircraft, the Airbus A380 into service. The middle-eastern carrier operated its first A380 flight from Dubai to New York August 1, 2008 making a decade this year.

Also the world’s largest operator of the type, Emirates has carried more than 105 million passengers on its A380 fleet over a combined distance of more than 1.5 billion kilometres on 115,000 flights, equivalent to 39,000 trips around the globe.

“It’s been 10 extraordinary years since the first Emirates A380 flight took to the skies, and today it has become one of the most recognisable and admired aircraft in the world. Passengers love to fly it because of its spaciousness which provides more comfort across all classes, and its iconic products like the OnBoard Lounge, Shower Spa and First Class suites have redefined air travel.  We remain committed to providing the best experience for our customers aboard our flagship aircraft, and introducing new innovations,” Emirates Airline President Sir Tim Clark says of the period.

With 104 in its fleet and another 58 on order, Emirates is by far the world’ largest operator of the double-decker aircraft that now flies scheduled services to 49 destinations spread across six continents. The A380 makes more than 80 departures out of Dubai daily. In addition to its 104-strong fleet, the airline has a further 58 A380s on order.

Emirates, which has only wide-body aircraft in its fleet, today operates both the shortest and longest A380 service in the world. The service from Dubai to Kuwait is the shortest A380 route in the world while Dubai to Auckland is the longest.

Emirates says its A380 has had a significant impact on the aerospace industry and its high-value supply chains, fuelling hundreds of thousands of jobs for skilled workers, and creating significant economic benefits in countries which have A380 production facilities.

“The aircraft continues to boost tourism and trade wherever it flies by stimulating further traffic and demand, and we hope that it continues to play an important role in the economies and societies that it serves in the years to come.”

The A380 first went into service with Singapore International Airlines in December 2007, followed by Emirates in August 2008.

While other carriers have stuck to low-density cabins on their A380’s, Emirates has configured some of its aircraft to carry 615 passengers – the highest density by any airline, in two classes. That number is just 185 short of the A380’s maximum capacity of 800 passengers in a single class configuration.

Airbus estimates that Emirates’ A380 orders support 41,000 direct, indirect and induced jobs in Europe alone. In January 2018, Emirates ordered a further 36 A380’s worth US$16 billion, taking the airline’s commitment for the aircraft to 178.