Emirates A380 quarantined at JFK Airport after passengers fall sick

An Emirates airlines Airbus 380 with around 521 people on board, was Wednesday morning taken into quarantine […] 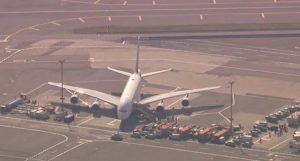 An Emirates airlines Airbus 380 with around 521 people on board, was Wednesday morning taken into quarantine upon landing New York John F Kennedy Airport after ten passengers developed fever en-route from Dubai.

EK 203, an Airbus A380, was met by medical staff at a secluded area of the airport after the Captain declared a medical emergency on board. The passengers reportedly had fevers with body temperatures above 100 degrees Fahrenheit and violent coughing.

It later emerged that seven of the ten sick people were airline staff.

The plane, arrived at the airport, where Port Authority Police and a team from the Centre for Disease Control and Prevention (CDC) investigated the incident.

Footage shows ambulances and other emergency services surrounding the plane, while New York Police Department Counter-terrorism said it was “monitoring” the quarantine in case the incident progressed above a medical situation and that it was working with the Port Authority and Federal partners.

The aircraft was not allowed to proceed to the terminal and was instead directed to a hard-stand area as emergency medical response teams investigate the cause of the illness.

Photographs tweeted by passengers inside the plane show dozens of ambulances and police vehicles parked and waiting as the aircraft landed.