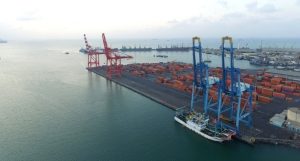 August 2, 2018—Djibouti lies more than 2,500 miles from Sri Lank,a but the East African country faces a predicament similar to what its peer across the sea confronted last year: It has borrowed more money from China than it can pay back.

In both countries, the money went to infrastructure projects under the aegis of China’s Belt and Road Initiative. Sri Lanka racked up more than $8 billion worth of debt to Chinese sovereign-backed banks at interest rates as high as seven percent, reaching a level too high to service.

With nearly all its revenue going toward debt repayment, last year Sri Lanka resorted to signing over a 70 pc stake and a 99-year lease to the new Chinese-built port at Hambantota.

Djibouti is projected to take on public debt worth around 88 pc of the country’s overall $1.72 billion GDP, with China owning the lion’s share of it, according to a report published in March by the Center for Global Development.
It, too, may face the possibility of handing over some key assets to China.

As Chinese President Xi Jinping continues to push lending to developing countries, policy analysts are sounding alarm bells about the fate of smaller nations biting off more than they can chew—and the strategic possibilities opening to China as a result.

Xi’s Belt and Road Initiative, which aims to revive and expand the ancient Silk Road trade routes on land and at sea, has become the crown jewel of his foreign policy since 2013, shortly after coming to power. Government officials regularly talk up the initiative and state media outlets give it broad coverage.

But many of the projects have stalled in the early stages of planning, and the dollar amount attached is left vague.
More importantly, the countries involved are often seduced by the appeal of large infrastructure projects that are financially destabilizing. Eight of the 68 countries involved in the Belt and Road Initiative currently face unsustainable debt levels, including Pakistan and the Maldives, according the Center for Global Development’s report.

Its vulnerability notwithstanding, Djibouti has been keen to work with Beijing. It partnered with China Merchants Ports Holdings Company, or CM Port—the same state-owned corporation that gained control of the Hambantota port in Sri Lanka—to build the Doraleh Multipurpose Port. That project was completed in May 2017.

But the most noteworthy development in Djibouti—and the most worrying for the United States—is China’s first overseas military base, which is located six miles (nearly 10 kilometres) from the US military’s only permanent base in Africa. From Camp Lemonnier, where about 4,000 US troops are stationed, the United States coordinates operations in “areas of active hostilities” in Somalia and Yemen.

In the past year, US diplomats and generals have grown increasingly concerned that the base will provide China a foothold at the Bab el-Mandeb Strait, a strategic choke-point in international maritime trade. About four percent of the global oil supply passes through this waterway connecting the Gulf of Aden with the Red Sea each year.

Gen. Thomas Waldhauser, who commands the US Africa Command, said in a testimony before the House Armed Services Committee in March that the United States was “carefully monitoring Chinese encroachment and emergent military presence” in Djibouti. Local relations between the two great-power rivals have become especially strained in 2018, with each lodging grievances against the other.

China, for its part, maintains that the naval facility will serve as a logistics hub for its anti-piracy, humanitarian, and emergency evacuation missions. The live-ammunition drills conducted at the base should be interpreted as “legitimate and reasonable” exercises for counter-terrorism operations, a commentator told the state-owned Global Times.

But satellite images of the People’s Liberation Army base may reveal its true purpose. A retired Indian Army intelligence officer noted last September that the 200-acre facility includes at least 10 barracks, an ammunition depot, and a heliport. Four layers of protective fences surround the perimeter; the two inner fences are eight to 10 meters tall and studded with guard posts.

The purported logistical support base is rather a fortress that may accommodate thousands of soldiers. More than 2,500 Chinese peacekeeping personnel are already stationed in countries such as South Sudan, Liberia, and Mali.

“There is nowhere else in the world where the US military is essentially co-located in close proximity to a country it considers a strategic competitor,” said Kate Almquist Knopf, the director of the Defense Department’s Africa Center for Strategic Studies. “This is not something the Pentagon is used to,” she said.

One concern is that the Djibouti government, facing mounting debt and increasing dependence on extracting rents, would be pressured to hand over control of Camp Lemonnier to China. 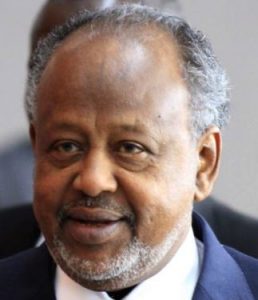 President Omar Guelleh has been accused by American legislators of selling out his country.

“Djibouti’s now identified as one of those countries that are at high risk of debt distress. So, that should be sending off all sorts of alarm bells for Djiboutians as well as for the countries that really rely on Djibouti, such as the United States,” said Joshua Meservey, a senior policy analyst at the Heritage Foundation.

“Policymakers are becoming more and more aware of this. The challenge is that there isn’t a strong sense of how to effectively push back or compete with China on some of these issues.”

Meservey says there are simple steps the United States could take to start balancing out China’s expanding influence, including institutionalizing the US-Africa Leaders Summit—a one-off event in 2014 hosted by President Barack Obama. The US government should also incentivize private sector investment in Africa, he said, thus creating competition with Chinese state-backed dollars on the continent.

Other analysts believe China’s debt-driven expansion could backfire on Beijing. Jonathan Hillman, a fellow at the Center for Strategic and International Studies, said one “underappreciated dimension” of China’s predatory lending projects in Africa was the uncertainty that Beijing takes on by doling out trillions of dollars abroad.

Hillman said, “If these projects do not go well, there is a financial and reputational risk to China. The port in Sri Lanka gets a lot of attention, but not too far from the port is an airport that now no plane flies into. That’s not a good advertisement for Chinese soft power or China’s strength or reliability as a partner.”