KAMPALA, APRIL 18- What will the pecking order in Uganda’s banking industry look like after all […] 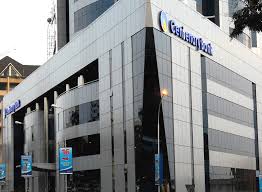 KAMPALA, APRIL 18- What will the pecking order in Uganda’s banking industry look like after all players have reported their 2015 financials? Going by what has been reported so far; Centenary Rural Development Bank is set to ease into the number two slot after posting a 37.6 percent increase in profit after tax from Ushs 73 billion to Ushs 101.6 billion.

That result is likely to be the next best after Stanbic which last week announced Ushs 151 billion in profit after tax, firmly pushing the rural development lender. Standard Chartered which is yet to report would be the victim if that prediction materialized.

In the Financial statement released today, Fabian Kasi the Bank’s Managing Director says 2015 was an excellent year for the bank although overall performance was dented by the volatility that characterized the sector during most of the year.

Centenary wrote off Ushs7billion in bad loans in 2015 as the non-performing portfolio expanded from Ushs24 billion in 2014 to Ushs27 billion.

In contrast DFCU registered a 49 percent increase in NPL’s to 71billion in 2015 has feported a 16 percent dip in profits to 35.3 billion.