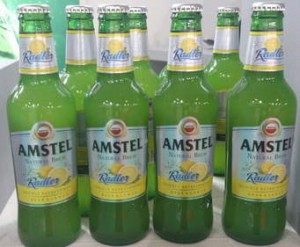 March 13, 2017 –BRALIRWA, Rwanda’s oldest beverage company this month launched a malt product, in an apparent attempt to even the stakes with rival Skol, who was running away with the premium beer market.

Bralirwa launched Amstel malt on March4, exciting a market that had settled into an uncomfortable duopoly since the entry of Belgian brewer Skol with its lager just under a decade ago.

But the Belgians were soon giving, Heineken, the Dutch owners of Bralirwa, a run for their money with the introduction of Skol malt that helped them make sharp inroads against the good old Primus lager.

Skol shifted elite consumer tastes towards malts, robbing Bralirwa of a small but powerful segment that punched well above its weight in litres consumed.

After much dillydallying, Bralirwa hopes it has found the silver bullet that will stop its rival from running away with the prize.

It was not immediately clear how Skol plans to respond to this development but the brewer has recently introduced a 500ml bottle for its Skol to sit between the 650ml bottle and the smaller 330ml bottle. For now, Amstel Malt is exclusively available in the popular 33ml bottle.

Although it is a relatively small market by population compared to her neighbours to the north and west, Rwanda has a lucrative alcohol market where the per-capita consumption of formal brews is higher than Uganda.

Rwanda has been ranked the fourth top market for alcohol in Africa with a per-capita consumption of 9.1 litres of alcohol per annum and eight percent of its population of 12 million consuming beer. That ratio is way ahead of second ranked Uganda which despite a higher per-capita consumption of 11.93 litres has only 4percent of its population of 37 million drinking beer.

In other news, Belgian-Brazilian conglomerate InBev is set to introduce Budweiser, the largest beer brand in the USA, to the Ugandan market.

While details are still sketchy and officials at InBev’s local subsidiary, Nile Breweries, have refused to comment on the reports, 256BN has been told that the brand will be launched around the window of the 2018 World Cup in June.