Dr. Ahmed Heikal, the Chairman and founder of Qaala Holdings goes to the 2016 Comesa Africa […] 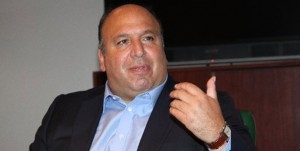 Dr. Ahmed Heikal, the Chairman and founder of Qaala Holdings goes to the 2016 Comesa Africa economic summit that opens in Sharm El Sheik, Egypt on February 20 with the same dose of optimism that has characterised his view of the continent. In this interview, he speaks to 256 Business News about Africa’s prospects, ahead of the gathering that brings together heads of state, investors and academics – Excerpts

In Davos, you made the proposition that what was lacking in Africa is the appetite for risk otherwise the continent was a good business proposition. What is the source of your optimism?

Africa mostly is growing at between 4percent and 6 percent. In comparison to the rest of the world these are still fantastic growth rates, and we are seeing phenomenal investment opportunities throughout Africa and in some parts of the Middle East, especially Egypt. We have a clear USD 93 billion annual deficit in spending on infrastructure, of which USD 17 billion per year is needed to redress not new infrastructure, but the existing efficiency gap in power generation.You have demographics that are favourable.  You have resources that are available.  You have better governance: that is – by and large –taking hold, with more or less much better governance across the entire African continent. That’s a massive opportunity by any count — if you know how to capture it and we cannot ignore the fact that while reforms have been slow, they are starting to take place. We will likely not feel the results of these reforms for another five years or so.

In Sharm el Sheik you will be speaking about managing the African opportunity and your experience as an African investor, can you give us a sneak preview of what that experience has been like?

I have built 27 new companies from scratch including two cement companies, a petroleum refinery, a river transportation network, and a glass manufacturing factory in a decade. I will be speaking about the lessons learned from that experience. During this journey, we have developed a proven model for funding large-scale African infrastructure projects that we refer to as the “Triple Combo.” This is largely the ability to tap into funding from development finance institutions (DFI’s), Export Credit Agencies (ECA’s), and sovereign wealth funds. We’ve used this formula to build and rehabilitate infrastructure assets including The Egyptian Refining Company, our US$ 3.7 bn refinery in Egypt which is due to start production in 2017. Today it stands as one of Africa’s largest-ever project finance deals and the largest private sector infrastructure mega-project in Egypt.

What do you see as the likely impact of the collapse in commodity prices for African economies?

Africa’s long-term growth drivers are unchanged. We still have more than one billion consumers, the largest working age population by 2040, growing faster than China and India, export led growth. The only thing that is missing right now, or rather on hold, is the commodities boom. We shouldn’t dwell on the impact of the current collapse, but rather focus on how we can cushion the region from future shocks.

What are the barriers to investment in the region and what measures need to be taken to attract more capital?

There’s still a reluctance in many cases to embrace the private sector but that is starting to change. Governments across the region are now entering into a new paradigm, they have come to the realization that they can no longer do it alone, they must partner with or enable the private sector to take on the large megaprojects that were previously only in the realm of the public sector. Governments are now starting to focus on fighting their own battles, dismantling the bureaucracy, playing the role of regulator and letting the private sector do its job. Governments cannot continue to shoulder these funding needs, or else emerging markets will wake up to a large credit crisis in five years. We also need to tackle the issue of transparency in the region.