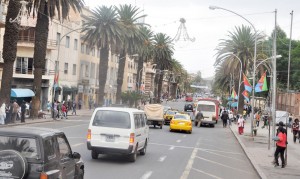 Asmara is the Eritrean capital, but business people here have to pay a total tax rate of 83%   which is one of the highest in the world.

May 24—Africa is a difficult place for paying taxes and has the second highest total tax rate in the world at 47.1% after South America’s 52.3%.

As a spin-off from the annual Ease of Doing Business survey, the World Bank Group teams up with financial services firm, PwC, and publish Paying Taxes.

Since paying taxes is a common denominator in doing business around the world, it was felt that a separate survey be done to weigh the frustration levels in different countries. For instance, the shortest time taken to receive a VAT refund is 3.2 weeks in Austria while the longest is 106.2 weeks in Cape Verde.

With all that oil sloshing about and despite lower international prices, it is not surprising that the lowest total tax rate in the world is found in the Middle East at 24.2%.

The Paying Taxes 2017 study looks at how easy it is for a standardized, medium-sized domestic company to pay its taxes. By gathering and analyzing comprehensive quantitative data to compare business taxation over time and across economies, Paying Taxes encourages governments to move towards more efficient system and offers measurable benchmarks for reform.

According to the report, taxes are important to the proper functioning of an economy. They are the main source of
federal, state and local government revenues used to fund health care, education, public transport, unemployment benefits and pensions, among others.

While the size of the tax cost imposed on businesses has implications for their ability to invest and grow, the efficiency of the tax administration system is also critical for businesses. A low cost of tax compliance and
efficient tax-related procedures are advantageous for firms.

Overly complicated tax systems are associated with high levels of tax evasion, large informal sectors, more corruption and less investment. Tax compliance systems should be designed so as not to discourage businesses from participating in the formal economy.

Modern tax systems seek to optimize tax collections while minimizing administrative and taxpayer compliance costs. The most cost effective tax collection systems are those that encourage the vast majority of taxpayers to meet their tax obligations voluntarily, thereby allowing tax officials to concentrate their efforts on non-compliant taxpayers and other services provided by tax administrations.

Paying Taxes 2017 states that taxpayers are more likely to comply voluntarily when a tax administration has established a transparent system that is regarded by taxpayers as being honest and fair.