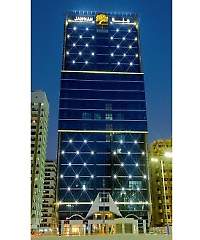 ABU DHABI, United Arab Emirates – A new hotel in Abu Dhabi is claiming it has the fastest Internet speed of any hotel in the world.

Managers of the Jannah Burj Al Sarab in Mina say they recently had their Wi-Fi upgraded to 1.2 Gigabytes per second (Gbps), putting them ahead of every other hotel to have tested their speed on the website http://www.hotelwifitest.com, which tests and rates Internet speeds available at hotels around the globe.

According to the website, there is no hotel nationally or internationally that comes close to Jannah Burj Al Sarab’s Internet capabilities. Prior to the upgrade, the hotel’s Internet speed was 270 Megabytes per second (Mbps), which was still higher than the world’s average Internet speed of 100-250 Mbps.

The highest measured speed in Abu Dhabi is 240 Mbps, while in Dubai, it has been recorded to be 48 Mbps.

The record-breaking Wi-Fi speed is great news for tourists and business travellers checking into the 318-room luxury hotel, which officially opens this month.

This unique feature is offered to all guests staying at the hotel, enabling them to use the web at full speed – and completely free of charge.

A public event will be held in the third week of November to formally launch the new Internet speed.