A220 ETOPS Certification gives Air Tanzania freedom over the skies 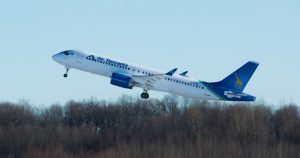 January 15, 2019 – The granting of 180 minutes ETOPS approval for the Airbus A220 potentially gives first African airline operator of the type flexibility to operate more economic routings with direct benefits to the bottom line.

Air Tanzania which recently became the first African A220 operator took delivery of its first aircraft in December and a second one on January 11.

Though the aircraft has been approved, undertaking such operations also requires approval at the airline level after its operations and maintenance processes have been certified.

Although aircraft such as the Airbus A350 and Boeing 777 have expanded the envelope for ETOPS operations to distances as far as six hours from a diversion airport, few airlines in practice actually exploit those margins. That is because fear over the endurance of other systems such as fire suppression and air supply.